TIME TO BRING ASSAD TO THE ICC

Around 3.00 pm local time yesterday afternoon, Wednesday, one of Assad’s MIG fighter jets screamed low over the FSA controlled town of Azaz in northern Syria near the Turkish border and delivered its deadly cargo of bombs. 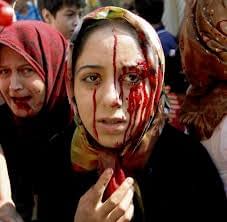 Its targets were the former Ba’ath Party headquarters, now the HQ of the local FSA and a detention block nearby currently housing regime prisoners, Assad officials and members of the Shabiha.

Neither building was damaged. Azaz is a key town in the supply of food, medical supplies and probably ammunition and weapons to the FSA units fighting in Aleppo 30 miles (45 kilometres) away.

Instead the bombs fell on a residential block completely flattening dozens of houses over a 4,900 square metre area, instantly killing 40 civilians and injuring between 100 and 150 others. 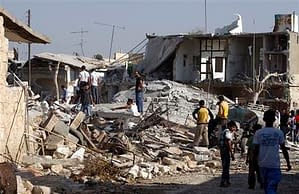 Houses on surrounding streets were also significantly damaged with collapsed walls and ceilings and shattered windows.

Families were resting at home together during the fasting hours of Ramadan.

The casualties have been moved as quickly as possible to Turkey for treatment but hospitals are struggling to cope with the influx. A further 15 are reported to have died since they were sent to hospital.

One resident. “Ahmed”, described how he buried 12 members of his family as a result of this airstrike.

“I was about 100 meters away from the house when I saw the airplane and heard the sound of the bombing and destruction.

I buried 12 of my family members today, including my father, my mother, and my sister – my brother’s wife as well. Walid, my brother, was cut into pieces. We didn’t recognize him at first. We buried my brothers’ children also. The youngest was 40 days old”.

You can read and see more from Human Rights Watch (HRW), who were there on the ground documenting the attack shortly after it happened, HERE:

International humanitarian laws on war, prohibit direct acttacks on civilian targets. Clearly the Assad regime has shown complete disregard for this, over and over.

UN HUMAN RIGHTS COMMISSION REPORTS ON MASSACRE OF 108 AT HOULA – “BLAME LIES AT THE HIGHEST LEVEL”:

Yesterday also the UN Human Rights Council in Geneva published a report on the massacre at Houla on the 25th May 2012 clearly attributing blame to Government forces and Assad’s armed militia, the Shabiha. The investigating commission interviewed more than 600 witnesses. 108 people were murdered, including 49 children and 34 women.

108 Buried at Houla After Massacre – Reuters

In part the report reads:

“The commission found reasonable grounds to believe that Government forces and the Shabbiha had committed the crimes against humanity of murder and of torture, war crimes and gross violations of international human rights law and international humanitarian law, including unlawful killing, torture, arbitrary arrest and detention, sexual violence, indiscriminate attack, pillaging and destruction of property.

The commission found that Government forces and Shabbiha members were responsible for the killings in Al-Houla.

The commission confirms its previous finding that violations were committed pursuant to State policy. Large-scale operations conducted in different governorates, their similar modus operandi, their complexity and integrated military-security apparatus indicate the involvement at the highest levels of the armed and security forces and the Government”.

The full report can be found here by clicking on “Advanced Edited Version” and the document will come up in Word.

The BBC has an interview with Paulo Sergio Pinheiro, the Chairman of the UN inquiry, HERE:

TIME TO BRING PRESIDENT BASHAR AL-ASSAD OF SYRIA TO THE INTERNATIONAL CRIMINAL COURT:

EDITOR: Following these 2 events yesterday I decided to take personal action and launched another petition on AVAAZ, this time a call to bring President Bashar al-Assad to justice at the International Criminal Court (ICC) to be tried for war crimes and crimes against humanity.

Bring Assad to the ICC for Crimes Against Humanity

No doubt Russia and China will block any attempt by the Security Council to refer Assad to the ICC, but if we get 1 million signatures even they will take notice!

Please retweet on Twitter and spread by email and on Facebook, Pinterest and other social media. More than 300 signatures have come in over the first 2 days from countries all over the world, including Russia.

The short address to retweet the petition is: http://bit.ly/AssadToICC