BAHRAIN’S MEDIEVAL RULERS  LURCH FURTHER TO THE RIGHT AND PROSECUTE FOR USING TWITTER:

BAHRAIN GOVERNMENT HARDLINERS ON THE ASCENDANT AS ALL OPPOSITION LEADERS TARGETED:

THE MORE THE AL KHALIFAS SUPPRESS, THE MORE RESISTANCE THEY WILL CREATE – SUMOOD:

In what appears to be another lurch further towards the right, Bahrain’s oligarchy (rule by the few) has charged Nabeel Rajab, President of the Bahrain Centre for Human Rights (BCHR), with “inciting illegal rallies and marches online by using social networking websites” and posting “defamatory and humiliating depictions of the public security forces”. 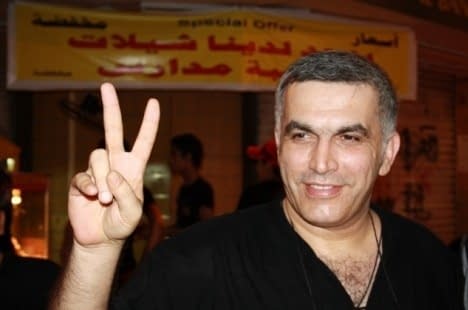 In other words, it is no longer safe to express your personal views on anything in Bahrain on Twitter unless you are a supporter of the government and opposed to the Opposition.

As Marc Owen Jones has pointed out in his recent blog post  the BICI report mentioned the Twitter account @7areghum which last year during the disturbances openly targeted Opposition supporters, naming them personally and even revealing their whereabouts, but of course nothing was done. Anything that damages the Opposition is fine by the Bahrain Government apparently.

But Nabeel Rajab is guilty, before trial, according to the Public Prosecutor of “cyber-incitement [which] proved detrimental as [it] fuelled rioting, road blocking, arsons, acts of sabotage targeting public and private properties, in addition to the use of Molotov cocktail incendiary bombs.

The inquiry has also revealed compelling evidence on the defendant’s role in instigating, online, acts targeting policemen whilst on duty, leaving some of them injured”. 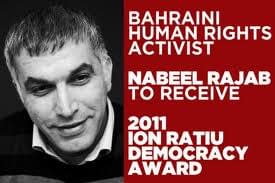 EDITOR: To the best of my knowledge, Nabeel Rajab, has never advocated violence as a solution to Bahrain’s problems but has only encouraged peaceful demonstration.

That others may have taken advantage of that is another matter.

Nor would Rajab and the BCHR have received numerous international awards if they were suspected of promoting violence or sectarian warfare.

I don’t see the Bahrain Government getting too many international awards for its “benign and enligtened” attitudes.

According to the Bahrain News Agency (BNA)  Nabeel Rajab “admitted posting the defamatory and humiliating material on his account” yet at the same time “refusing, however, to answer detailed questions”.

Nabeel has refused to answer further questions apparently as “he does not recognise the court” and has been remanded in custody until the next court appearance on May 22nd.

You can support Nabeel Rajab by signing this petition at Change.Org, HERE: and getting all your friends to sign to.


BAHRAIN GOVERNMENT HARDLINERS ON THE ASCENDANT AS ALL OPPOSITION LEADERS TARGETED:

Combine the above with a statement from the Prime Minister, Khalifa bin Salman Al Khalifa, at his weekly Cabinet meeting that “the persistence of some speechmakers in exploiting religious platforms for political purposes and their adopting of techniques aimed at provocation of violence and sectarianism and their calls for breach of law, abuse of constitutional institutions …. etc”. –

A Cabinet of Hardliners Led By "Prince Grim" - BNA

EDITOR: (Yes, their pronouncements get tedious, I know)  – It is beginning to look like that all Opposition leaders are now clearly under attack.

Undoubtedly, leading cleric Sheikh Isa Qassim is in their sights.

Once again, Bahrain’s hardliners are on the ascendant.

Having isolated Adbulhadi AlKhawaja and 14 other Opposition leaders with imprisonment and prolonged and repeated trials, having ousted the well educated and articulate medics from their jobs and tied them up with weekly court appearances, having jailed internationally known high profile leaders like Zainab AlKhawaja and Nabeel Rajab and strictly controlled who is and isn’t allowed into the country, no doubt the Al Khalifas and their supporters are hoping that a “leaderless” Opposition will crumble.

EDITOR: I predict they are in for a big disappointment.

Over and over, Bahrain’s Opposition has made the point that this is not a sectarian struggle but a genuine one for human rights and democracy in Bahrain. With the F1 debacle, even the most sceptical Western observer must now be aware of what is really going on (well, perhaps not the delusional Bernie, but he’s a lost cause!).

Unless they release the imprisoned Opposition leaders and have a proper negotiation with them leading to democratic government, there is not a “cat in hell’s”  chance of peace in Bahrain.

THE MORE THE AL KHALIFAS SUPPRESS, THE MORE RESISTANCE THEY WILL CREATE – SUMOOD:

Frankly, the Saudis, the Al Khalifas and all the autocratic monarchies in the Gulf think that they can continue to control, manipulate and consolidate their power for their own sectarian and self-serving familial ends. But suppression and more suppression induces resistance and ultimately more resistance, that is natural law.

However long it takes, the Al Khalifas’ dictatorship is doomed to failure and for every Opposition leader they remove another half a dozen, media and technology savvy younger leaders will step into their shoes.

Take heart suppressed people of Bahrain and all those others across the Gulf, I and other human rights activists and organisations will continue to support you, however long it takes.”Sumood” (Endurance). 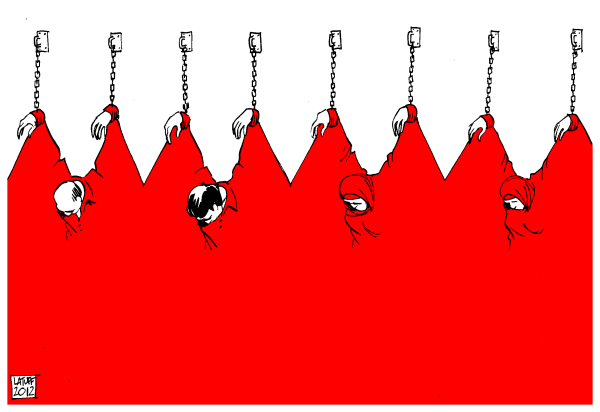 Democracy in Bahrain "Hung Out to Dry" - Courtesy @CarlosLatuff