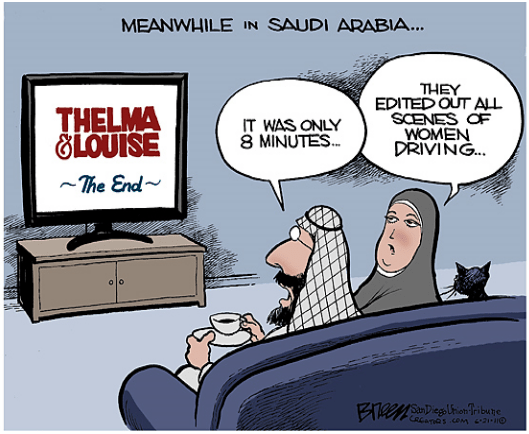 SAUDI WOMEN TAKE ONE SMALL STEP INTO THE 21ST CENTURY

Congratulations to Saudi Arabia as Saudi women take one small step into the 21st century by both voting and standing for council posts in last weekend’s municipal elections. 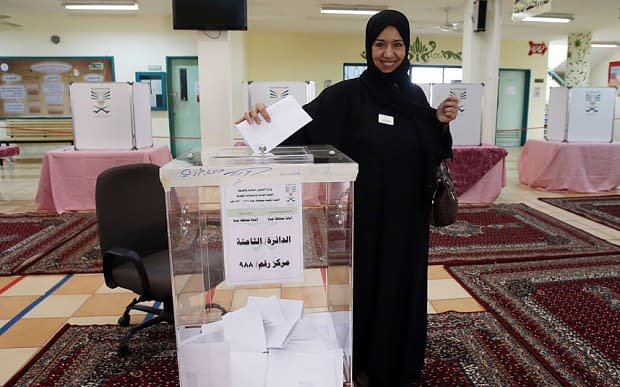 Women in Saudi Arabia Vote for the First Time

Right across Saudi Arabia from small villages to the largest cities, 20 women were elected to municipal council seats.

Of the 7,000 candidates who stood for election, 979 were women and 2,100 seats were up for the taking in 249 local councils, so 20 female winners represent only 1% of those appointed – but it’s a start when before you have had no representation at all.

The Saudi King also has a quota of 1,050 seats to fill with his appointees, so hopefully he will he will take the opportunity to let in a few more of the women candidates.

4 women were elected in Riyadh, the conservative capital and 2 in the predominately Shia Islam Eastern Province.

Another woman was elected in Jeddah in western Saudi Arabia, perhaps the country’s most cosmopolitan city, while one more gained a seat in the holy city of Medina, the site of Prophet Mohammed’s first mosque.

Another woman was elected in the village of Madrakah, 150 kilometres north of Mecca which over bad roads has the nearest hospital, pointing out that many women in her village ended up giving birth in cars.

Other issues raised by the women candidates were more nurseries to look after children while mothers worked, more community centres for sports and cultural activities, the aforementioned better roads, improved garbage collection and greener cities.

I suspect there might be some more directly feminist issues waiting to surface in the background, but with this tentative level of suppression release it is probably wise to save those for another day. Saudi Arabia’s extreme clerics will be enraged at the changes as it is.

While I am no great believer in the inalienable rights or abilities of hereditary royals, when it’s all you’ve got and they hold all the power and the purse strings, that’s what you have to work with.

In an attempt to make the elections a more level playing field for women forced to wear the full face-veil the General Election Committee, presumably on orders from the Government, banned all candidates, male and female from showing their faces in promotional posters, advertising boards or online. They were also not allowed to appear on television.

In Jeddah, 3 generations of women from the same family voted for the very first time, the oldest being 94.

Her daughter reflected on how important it was to vote, saying, “I walked in and said I’ve have never seen this before. Only in the movies. It was a thrilling experience.”

That response, while understood, would probably be seen as “sad” in the West.

Especially as Saudi women are still not allowed to drive a car, go out on their own unless accompanied by a male chaperone (usually a close family member), go to a mixed swimming pool, compete in sports, or wear clothes or make-up that “may show up their beauty”.

Interestingly, in a show of support, Uber drivers in some of the major cities drove women to the polling stations in last weekend’s elections, for free (though I can’t help wondering how many men refused to accompany their wives or even let them out of the house?)

There is still a long way to go.

Saudi women who competed in the last Olympic Games were described as “prostitutes” by hardline clerics back home and the Saudi consultant to the Olympic Committee has even proposed this year, 2015, that Saudi Arabia be allowed to host the Games – but with no women at all taking part!

At a recent book fair in Jeddah, where books by female Saudi writers were displayed and women took part in Q and A panels (and even Donald Trumps’ books were on display), 2 men got up and protested when a female poet started quoting poetry from her new book.

One of the men, addressing the audience, asked, “Do you accept that a woman recites poetry?” Fortunately, the audience responded with an unequivocal ‘yes’ and the two men were escorted out.

In Saudi Arabia the roots of all this, on the surface at least, lie in Wahaabism the official religion of the State founded on the teachings of Muhammad ibn Abd-al-Wahhab, an 18th century cleric from the remote eastern interior of Arabia.

The main tenets of this religious philosophy is that there is only one God, Allah, and any that do not believe in him are unbelievers or apostates. The sectarian philosophy also does not believe in the worship and revering of clerics or saints and that there should be no shrines or places of worship other than those purely devoted to the “one God” (as defined by them).

This therefore excludes the Shiite Moslems who have numerous shrines and places of pilgrimage. In fact, in the original Wahaabi doctrines, jihad, or holy war against all “unbelievers”, including all other Moslems, was fully permissible.

In its extreme form Wahaabism forbids the “performing or listening to music, dancing, fortune telling, amulets, television programs (unless religious), smoking, playing backgammon, chess, or cards, drawing human or animal figures, acting in a play or writing fiction” and even the keeping or petting of dogs.

As mentioned before, Wahhabism also forbids the driving of motor vehicles by women and sexual intercourse out of wedlock may be punished with beheading – although sex outside marriage is permissible with a “slave woman” (though probably not a woman with a “slave man” of course?).

(Just as well as Prince Bandar bin Sultan [former ambassador to the US and director of Saudi Intelligence] was the result of a “brief union” between his father, Sultan bin Abdul Aziz and a 16 year old “black serving women” – though slavery has since been “formerly banned” in the kingdom.)

In all of this it is easy to see the where the Islamic State gets its basic tenets and “vindication” from, offering a “pure” form of Islam which is “justified” in taking over the world (See last week’s post on The Anatomy of an Islamic State Jihadist).

Wahaabism has been so successful because it formed an alliance with the militarily aggressive House of Saud back in the 18th century, eventually taking over the whole of the Arabian peninsular, and more recently because of the billions of dollars of oil revenue monies used to promote it.

The result however is a bloody and deadly sectarian schism in Islam between the Sunni (of which Wahaabism is a part) and Shia branch descendants of Prophet Mohammad. Until this is sorted the Middle East and many other parts of the Islamic world will remain a mess.

However, the apparent misogynist aspects of Islam, Wahaabi or otherwise, are not restricted to males of the Moslem religion, they are still too common in the rest of the world.

Here in the UK, British boxer, Tyson Fury, who became WBA World Heavyweight Champion in November 2015, recently caused controversy by declaring that “a woman’s best place is in the kitchen and on her back – that’s my personal belief.”

Undoubtedly, he should keep his “personal beliefs” to himself, but I suspect that covertly a lot of men, wherever they are in the world, think the same way.

Such beliefs, in my view, are based on fear, pure and simple.

Again, as I have often written, our values are formed in childhood and if we grow up with bullying mothers, for whatever reason, and/or are encouraged by other males in the absurd notion that somehow men are “superior”, then we are more likely to gravitate to a male ethos that tries to suppress women in adulthood.

In fact it may be that suppression of women in the Islamic world and elsewhere which contributes to the disdain and disrespect that males show as adults towards women, is sometimes started by frustrated women taking out there anger at exclusion from full participation in the world, on their male (and female) children. And so the circle of deprivation and loss continues into the future.

The key to accelerating change is female education, as Malala Yousafzai, the 18 year old Pakistani, Noble Peace Prize winner has championed and to which, unsurprisingly, the Taliban and the Islamic State remain fiercely opposed.

At the Jeddah book fair mentioned earlier, the Saudi Minister of Education and Information, Adel al-Toraifi, said that an Arab reads six minutes a day, compared to the world average of 36 minutes.

He also said that the Arab world prints 27,809 books a year, which translates into 12,000 Arabs getting one book.

Hopefully, the spread of and access to the Internet (when its male viewers are not accessing pornography) can help to change all that.