After 3 days the battle for control of Idlib’s main prison continues. In dramatic scenes on Friday, Opposition forces in co-ordinated attacks on regime positions across the city of Idlib, managed to break into the central prison and free more than 300 grateful prisoners, reputedly capturing a number of Assad’s soldiers in the process.

10 Opposition fighters were killed in the attack but those remaining are still fighting for complete control of the penitentiary in a city which is still largely under Government control.

Government forces are desperate to retake the prison, even using MIGs to drop bombs inside the penitentiary compound, because it is also a major checkpoint controlling the entrances to the city from the west.

The prison contained both criminals and political prisoners and the Opposition fighters will bring those they released before a judge to decide whether they should be released completely or complete their sentences elsewhere.

Opposition forces are almost certainly control of vast areas across Idlib province itself, enabling them to to now concentrate their fire on the provincial capital. Al Jazeera has a video of prisoners being released from Idlib prison, HERE:


In the north-eastern part of Idlib province Opposition fighters yesterday captured the villages of Yaqoubiya and Janoudiya plus 4 tanks and 3 armoured vehicles.

Deir el-Zour is under similar Opposition assault and unconfirmed reports say that the fighters have captured a large military checkpoint near the Deir Az-Zour Suspension Bridge and are targeting Assad’s political intelligence branch which overlooks the Euphrates river that divides the city in two.

Around Damascus, the fight for the Sunni suburbs continues with the Assad regime bombing and shelling civilians incessantly and unmercifully.

Fierce clashes are being reported at checkpoints near the entrance to the Yarmouk Palestinian Refugee camp and activists say that 13 people were summarily executed at a checkpoint by Shabiha in Daraya, where Opposition fighters are bravely holding on, even managing to destroy 5 tanks and 6 armoured vehicles trying to enter the suburb. 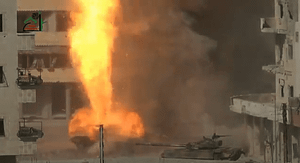 There is also an unconfirmed reported that the Syrian Air Force managed to kill some of its own troops battling for Daraya yesterday afternoon, Sunday, with “friendly fire”.

The strength of the fighters in Daraya seems to lie in the fact that they are mainly defected conscripts from the nearby Assad military bases and know the area extremely well.

Latest reports from Damascus today, Monday, confirm that following heavy fighting  Opposition fighters captured the Qadam train station and terminal, reportedly one of the largest regime outposts in the south of the capital.

The clashes have led to the closure of the main highway nearby which links Damascus with Deraa in the south of the country.


Opposition fighters around Damascus also seized the base of the Army’s 22nd brigade in the East Ghouta district, just 10 kilometres east of Damascus International Airport, and captured another 2 tanks and large quantities of weapons.

Additionally they attacked the 781st Air Defense base in the suburb of Khan al-Sheeh and the Military Security Branch in the town of Sa’saa where they were able to set dozens more  detainees free. 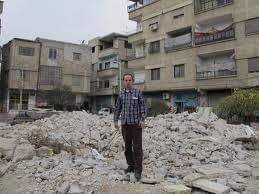 Al Jazeera has a video report on the Damascus suburb of Harasta, once home to more than 500,000 mainly Sunni Syrians.

Over 22 months the city has been completely destroyed, almost all the residents have fled and it is now occupied by roaming packs of dogs or cats.

Assad’s Army destroyed whole blocks of apartments, just to get a line of sight for its snipers. This is what is left, HERE:


In Aleppo province indiscriminate Government air strikes have killed 20 in Menbij, half of them children, and another 10 at Al-Bab. Video footage of the aftermath of the airstrike showed no military targets or Opposition fighters in sight.

Opposition fighters have also captured the Military Housing Foundation and the cement factory in the Sheikh Saad district of Aleppo city while continuing their attacks on the airbases surrounding the city. And in Homs province there is a renewed Government assault on all towns and villages that have resisted Assad control.

Indicating the increasing scale of the fighting, activists observing activity at Latakia airport say that the Bustan Foundation, a charity run by Rami Makhlouf, Assad’s cousin, handed over the bodies of 84 killed soldiers and Shabiha to their families in the province.

Reports this morning, say that the regime is pounding villages 25 north-west of the central city of Hama in an attempt to regain the countryside surrounding the provincial capital causing 100’s of people to flee in cars and on tractors and motorbikes.

RUSSIAN PM SAYS ASSAD MADE “FATAL ERROR” AND HIS CHANCES OF STAYING IN POWER “SHRINKING DAY BY DAY”:

In the most explicit criticism of President Assad yet by Russia, the country’s Prime Minister, Dmitri Medvedev, said, in an interview with CNN at the World Economic Forum in Davos, Switzerland at the weekend, that the Syrian President had made a “grave, perhaps fatal error” by delaying political reforms.

“He should have acted much more quickly and reached out to the peaceful opposition which was ready to sit at the negotiating table with him”, said the Russian Premier.

It seems to me that his chances of staying (in power) are shrinking day by day.”

As if in a belated awareness of the regime’s errors has penetrated its consciousness, the Assad Government has released a string of bizarre announcements in the last few days, most of which will get little or no reaction.

Last Thursday, the regime called on all its citizens who have fled the country to return, saying they will get “aid” regardless of whether they left the country legally or illegally or are opponents of President Assad or not. The Government also called on Opposition figures to take part in reconciliation talks, but that is not even on the agenda for the Opposition until Assad falls.

Yesterday, the Syrian High Judicial Council announced a suspension of prosecutions of opposition members so they can join such a national dialogue but activists say, the Government, following its usual path, arrested a senior member of Damascus-based opposition National Development Party, Khalil Mustafa Sayed, on Friday.

Even Syria’s semi-approved internal Opposition has accused the Assad regime of being responsible for the killing of 87 students at Aleppo University.

ASSAD BELIEVED TO BE HIDING IN BUNKER COMPLEX BENEATH PRESIDENTIAL PALACE WITH ENOUGH “SUPPLIES FOR 6 MONTHS”:

Assad in Bunker Underneath Presidential Palace?

As for Assad himself, unconfirmed reports say that he is in a 100 room bunker complex underneath the presidential palace supported by 50 highly-vetted staff.

The reports say that there is a gym, a cinema, operations and communications rooms and enough supplies to last them 6 months.

Opposition fighters are busy however firing home-made rockets at the palace, HERE:

For a good feel of how it is to visit Syria right now, have a read of this excellent article in The National, HERE:


Internationally, President Obama gave an interview to the New Republic magazine in which he described how he had to wrestle “with where and when can the United States intervene or act in ways that advance our national interest, advance our security, and speak to our highest ideals and sense of common humanity”.

“And as I wrestle with those decisions, I am more mindful probably than most of not only our incredible strengths and capabilities, but also our limitations”.


Lastly, in a moving tribute of solidarity with the students killed at Aleppo University, students across the United States met to remember them, seen in this video, HERE: