EGYPT’S ARMY, WITH VAST BUSINESS INTERESTS, IN NO HURRY TO HAND POWER TO DEMOCRATICALLY ELECTED PRESIDENT:

BAHRAIN AND GULF STATES STILL CONTROLLED BY BACKWARD FACING FAMILY AUTOCRACIES AND NO REAL DEMOCRACY YET IN SIGHT:

Congratulations to Libya on holding yesterday its first fully free parliamentary election since 1952. 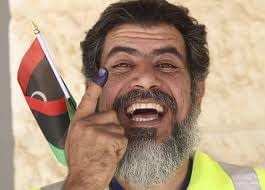 Democracy in Libya – “I voted!”

Turnout was thought to be around 60% and notable for the large number of women who were voting for the first time.

The election will select a 200 member General National Congress (GNC) from the 2,600 individual candidates and 400 political organisations who stood in the poll.

The most significant party to emerge so far is the Justice and Construction Party, consisting mainly of members of the Muslim Brotherhood.

The GNC when elected will pick a prime minister and cabinet. The GNC was also meant to choose 60 members to make up a committee to write a new Libyan constitution which will be voted on in a referendum next year, but the National Transitional Council (NTC), which will stand down as soon as a new government has been formed, has said the the constitutional committee will now be the subject of a separate national vote.

However, as elsewhere in the “Arab Spring” revolutions, the transition to the democratic process continues to be very rocky. 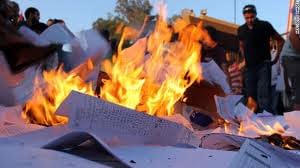 In Libya, especially in the east around Benghazi, some polling stations were burnt to the ground or election material and voting papers destroyed and a helicopter carrying elections workers was shot at with heavy calibre bullets on Friday killing one of the occupants and forcing the aircraft to make an emergency landing.

Armed groups opposed to the election and wanting autonomy for oil-rich eastern Libya, also surrounded and closed the oil refineries at Ras Lanouf, Brega and Ajdabiya. In a separate incident another person was killed near a polling station in Ajdabiya.

In the current election of the 200 available seats, in a system devised by the NTC, the west of Libya will have 100, 40 will come from the south and 60 from the east. Many from the east think that the parliament will therefore be too “Tripoli orientated”, a sentiment which many in Benghazi province shared under Gaddafi as well. The BBC has a video report of the election, HERE:


Hopes for an effective and solid democracy in Libya also remain on shaky ground with the recent detention for 26 days of International Criminal Court (ICC) defence lawyers for Saif Gaddafi and their leading counsel, Melinda Taylor’s assertion since her release that it will be impossible for Saif to get a fair trial in Libya. You can see a video of her statement, HERE:

Democracy in Libya – “I voted too!”

Further worries for Libya’s progress are the huge tribal divisions and rivalries that still exist throughout the country, in some cases relating to disputes over killings or land that go back generations.

Two weeks ago, more than 100 people were killed following a clash between the Zintani and Mishasha tribes around the desert town of Misdah, both sides using weapons obtained from the former Gaddafi military. (Further background, HERE:)

In Tunisia, the first of the “successful” Arab Spring revolutions, the entire membership of a commission set up to reform the country’s media, resigned this week, citing interference and censorship from the newly elected government.

Tunisia – The Future Is In Our Hands

Kamel Labidi, the head of the The National Authority for the Reform of Information and Communication, said that the commission did “not see the point of continuing to work”.

The democratically elected majority Islamist government recently dismissed the senior executives of state-owned radio and TV channels and in another case fined the owner of a privately-run TV station for showing an animated film that the Government deemed blasphemous.

In reaction to these moves, Reporters Without Borders, the international media watchdog, said, “In the absence of clear legislation respecting international standards, senior public broadcasting personnel are being appointed in a way reminiscent of the old regime’s methods.”

The Tunisian Government has also failed to implement decrees protecting the rights of journalists and regulating new audio-visual media.

EGYPT’S ARMY, WITH VAST BUSINESS INTERESTS, IN NO HURRY TO HAND POWER TO DEMOCRATICALLY ELECTED PRESIDENT:

In Egypt, newly elected President Mohammed Mursi, from the Muslim Brotherhood (a banned organisation for years under Mubarak), promised massive crowds in Tahrir Square, the centre of the revolution, that he would represent all Egyptians of all faiths, but whether the Army Council that effectively still controls the country will actually allow him any real power remains to be seen. The BBC has a video report of the event, HERE:

The Supreme Council of Armed Forces (Scarf) that has been running Egypt since the fall of Mubarak, delayed the announcement of the winning candidate in the election and gave itself sweeping new powers just a few days before the presidential vote.

Scarf not only dissolved the newly elected parliamentary assembly but gave itself new authority to enact legislation, control the state budget and appoint a panel that will draft the new constitution.

The army, which controls vast sections of the Egyptian economy, including manufacturing of consumer goods, food, mineral water, construction, mining, land reclamation and even tourism (while its accounts are held secretly), is clearly not going to let go of its controlling reins without another fight.

In Yemen, where another Arab Spring revolution of sorts, saw the departure of longtime dictator Ali Abdullah Saleh in February after ruling for 33 years and the unopposed election of his deputy President Abdrabbuh Mansour Hadi, chaos still reigns, especially in the south where Al Qaeda insurgents have tried to take control.

Government forces have made gains during recent months, recapturing the insurgent held towns of Shuqra, Zinjibar and Jaar, but things came to a halt in the middle of June when a suicide bomber killed General Salem Ali Qatan who was both leading the battle in the south and moves to reform the army.

Another suicide bomber killed 100 soldiers in May while they were rehearsing for a parade for “National Unity Day” in the capital Sannaa.

The Faces of Yemen’s Poor – bbc.co.uk

Apart from that Yemen has massive problems with unemployment, malnutrition, poverty, lack of water and electricity and starvation on a huge scale.

And additionally many of Saleh’s family members have yet to relinquish power over key positions in the air force, Republican Guard, Presidential Guard and security services. (Further background on Yemen, HERE:)

A new democracy?  That remains to be seen.

But at least all the above have made some sort of move forward.

BAHRAIN AND GULF STATES STILL CONTROLLED BY BACKWARD FACING FAMILY AUTOCRACIES AND NO REAL DEMOCRACY YET IN SIGHT:

In Syria the “jury is still out” on the likely result in the bloody battle between President Assad and the pro-democracy Opposition, that has so far claimed more than 16,500 lives, but recent signs seem to indicate that the rebel fighters are making progress.


In Bahrain however, where the pro-democracy movement has been demonstrating almost daily against the Government for 17 months now, things at times seem to be going backwards.

A sly, Al Khalifa family-controlled and King Hamad led autocracy, constantly bleats about how “liberal and open” it is and trumpets its “march towards democracy”.

Yet behind closed doors, for example, people who criticise the Government get arrested without warrant and despite the installation of recording equipment in police interview rooms, detainees are routinely beaten in unfinished building lots before being taken to police stations.

“For now, it is clear that the current political system is neither monarchical nor democratic enough to exploit the benefits of either. The lesson appears to be that a country cannot balance power effectively between an appointed cabinet and an elected parliament.

In an absolute monarchy, the king calls the shots and appoints who he wants to help him govern. By contrast, in a fully democratic system, competing ideologies vie for political dominance through various electoral systems, and the government branches function as a system of checks and balances. But …. where the systems are mixed, the executive and legislative branches are inherently locked in a power struggle.

This almost guarantees perpetual confrontation rather than some degree of symbiosis. The hybrid approach does not appear to be a formula for effective governance, but may instead be a structural defect that will continue to foster the kind of political chaos for which ……. is increasingly known.

It could be argued that the real question going forward is not how ……. will navigate through the current storm, but rather when (or if) it will be able to effectively repair its sinking ship.”

Filling in the gaps in the passage above you would see that Fahed was actually writing about Kuwait, where the elected parliament is in conflict with the upper chamber appointed by the Emir and has been suspended, but he could have just as well been writing about Bahrain.

Much the same system exists in Bahrain and throughout the Gulf area where family monarchies and sheikhdoms control their oil and gas producing fiefdoms. (Further background on Bahrain, HERE:


In my view, the “Arab Spring” revolutions will eventually reach these countries too –  modern media, communications and “an idea whose time has come” will ensure that – but when and how nobody knows.

To those fighters for democracy, human rights and freedom across the Gulf – “Sumood” (Remain Steadfast) – your time will come, history is on your side.

UN Monitors Allowed Into Site of 4th Massacre Only After “Attempted Cover-up”?