3 REASONS WHY THERE ARE NO HUMAN RIGHTS IN BAHRAIN:

Bahrain’s Ambassador to France, Dr Nasser Mohammed Al Balooshi (EDITOR: English spelling of the surname confirmed by the Gulf Daily News today) yesterday denied “unfounded allegations” that he had groped a domestic worker at his up-market residence in the Paris suburb of Neuilly. 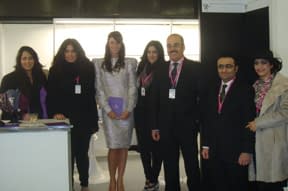 On Tuesday the French police had announced that they had opened an initial investigation into claims by a 44 year old domestic worker that the Ambassador had groped her and attempted rape on a number of occasions between July 2010 and October 2011.

The woman, whose husband has also lodged a complaint, was fired shortly afterwards.

The alleged victim also says that the Ambassador’s son threatened her with a gun in September 2010.

A statement released by the Bahrain embassy in Paris yesterday said, “His Excellency Nasser Al Balooshi, Ambassador of the Kingdom of Bahrain to France, forcefully refutes the inaccurate and unfounded allegations of assault that former domestic workers have made against him and his son,” and added that the ambassador was available to French investigators “to shed light on these false accusations.”

The initial inquiry is to determine the veracity of the allegations. It could lead to charges, the appointment of an investigating judge, or no further action.

Back in Bahrain, unable to completely ignore the international media reporting of the incident, both the official Bahrain Government News Agency (BNA) and the leading English language paper, Gulf Daily News (GDN), played down the report.

In 7 short lines the BNA reported  that his “Excellency … forcefully refutes the inaccurate and unfounded allegations” and without any investigation has already decided that these were “false allegations”.

The GDN rather naively headlined the report “Harassment Case Envoy Skips Work”, as though he had rather naughtily just decided to  take a day off without permission.

Again in a short 8 line report it repeated the outline of the alleged allegation and then said, “An embassy official told the GDN that Dr Balooshi did not show up for work yesterday, without commenting further” and , “Officials at Bahrain’s Foreign Ministry could not be reached for comment”.

(EDITOR: They had all obviously “skipped work” for the day as well suffering from an acute outbreak of “dire embarrassment”.)


The Gulf Daily News also pointed out that Dr. Balooshi is Bahrain’s permanent delegate to the United Nations Educational, Scientific and Cultural Organisation.

What the state news agency or the GDN have not mentioned (neither being part of a free press) is that Dr. Nasser Ballooshi is the brother of Dr. Fatima Balooshi, who until Tuesday was Bahrain’s Minister of Human Rights and Social Development. 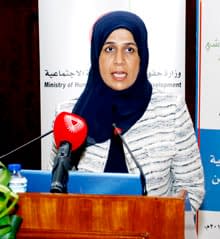 Since Tuesday, when the reports from Paris first surfaced, Dr. Fatima Balooshi is now only the “Minister of Social Development”, “Human Rights” having “gone out the window” and  hastily dropped by royal degree from both her official title and the name of the Ministry.

Co-incidence? Or has a family “human rights abuse” “accident” caused the Minister and the Bahrain Government acute embarrassment?

Any bets on how long before the “ambassador” is recalled to Manama?

Another Tweet received this morning comments on Dr Naser Balooshi’s former post as Director of Administration at the Bahrain Central Bank, where he is reported to have been reluctant to recruit Shia employees and to have “used the bank drivers to serve him and his family”. “He treated them bad”, says the Tweeter.

Nasser Al-Balooshi was also formally Bahrain’s ambassador to the United States. Apparently, the Balooshi family originates from Iranian Balochistan, a Sunni area in conflict with the Shia Government of Iran.

(EDITOR: And which is why the Al Khalifa Government employs Shia-hating mercenaries from the Balochistan area in Pakistan to work for them as policemen.)

3 REASONS WHY THERE ARE NO HUMAN RIGHTS IN BAHRAIN:

Talking of HUMAN RIGHTS ABUSE (1), here is a picture of 11 year old Ali Hassan, now detained in Bahrain police custody for more than 3 weeks for “participating in an illegal gathering”.

(EDITOR: Perhaps he and “Ambassdor Balooshi could swop places? I am sure Ali would be much better behaved.)


Yesterday, Ali is reported to have told his lawyer, “I just want to go home!”.

HUMAN RIGHTS ABUSE (2): According to reports, Nabeel Rajab, the President of the Bahrain Centre for Human Rights, was arrested in court again yesterday for Tweeting messages allegedly “insulting” the residents of the Sunni dominated neighbourhood of Muharraq.

In a complaint registered with the Public Prosecutor’s office, 24 retired police officers who live in Muharraq accused Nabeel Rajab of casting doubt on their patriotism and allegedly suggesting the people of Muharraq were “government stooges”.

(EDITOR: The retired policemen obviously have too much time on their hands!)

HUMAN RIGHTS ABUSE (3): It is reported from the Dry Docks Prison that 50 detainees have gone on hunger strike in protest at the continued refusal of the authorities to allow imprisoned demonstrator Ahmed Oun to have scheduled medical treatment for the removal of a shotgun pellet in his eye.

Ahmed Oun, a 17 year old student, was injured after being fired at with a police shotgun whilst taking part in a pro-democracy demonstration and was arrested shortly afterwards after seeking medical help at a private hospital.

Surgery was arranged for the 29th May but Ahmed has been prevented by the authorities from having that treatment. Every second counts. If the pellet is not removed shortly, doctors say he could well lose his sight permanently.

Ahmed is in severe pain, has bleeding from the eye and is reported to have fainted on several occasions.

Since the Formula 1 event in Bahrain in April the use of birdshot directly fired at protesters has increased significantly, causing loss of sight in a number of demonstrators and at least one death.


There is an #EYE4FREEDOM demonstration in Bahrain today, in support of all those who have lost an eye in the struggle for freedom in Bahrain and specifically to demand treatment for Ahmed Oun.

Ahmed Oun in Private hospital Shortly Before His Arrest. – BCHR

Previous Post Threats, Delusions and Sectarian Persecution in Bahrain and Saudi Arabia Next Post UN Monitors Allowed Into Site of 4th Massacre Only After “Attempted Cover-up”?