CULTURE MINISTER GUSHES ABOUT A “GOLDEN PHASE” AND “MR. SMIRKY” SAYS ITS A “QUANTUM LEAP”:

CONSTITUTIONAL REFORMS? MEANINGLESS WHILE BEATINGS, ABUSE AND TEAR-GASSING CONTINUE ON A DAILY BASIS:

In another frenzy of self-congratulation the prominent members of Bahrain’s ruling Al-Khalifa family yesterday “hailed” and “lauded” the approval of “constitutional amendments” following a long-winded speech by king Hamad Bin Isa Al Khalifa at a ceremony in Manama, the capital, on Thursday. 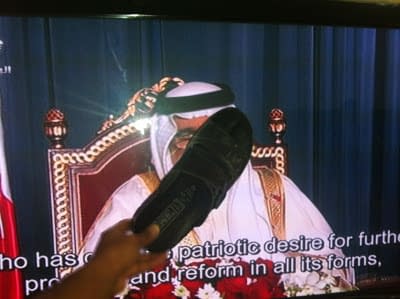 In the speech, which was big on meaningless rhetoric and short on meaningful content, the king burbled on about ” a qualitative leap” and the “National Action Charter, which garnered overwhelming popular support, and almost unanimous consensus”.          Picture: King Still Hiding From Democracy.


(Just one small problem in that almost 70% of the population does not support it! But we will overlook that, obviously maths is not the king’s strong point)

“As history has proven, citizenship, unity, and participation are the pillars of the reform and development march”, the king rambles on, “Thus, the doors for dialogue are wide open, and national consensus our ultimate aim”.

“These constitutional amendments, through the participation of the legislative power in consolidating its role to oversee the government’s performance, and …..” EDITOR: Actually I can’t repeat any more of this.  If you are into sado-masochistic torture you can read the full text, HERE:

In essence the “constitutional amendments” rule that the king now has to consult the heads of the elected parliament and the appointed Shura Council before dissolving the legislature.

Additionally, the elected House of Representatives alone now has the right to vote to withhold its cooperation from the prime minister and refer its decision to the king – who then has the final choice on whether to dismiss the premier or keep him in post.

In other words, there is no significant change in the ultimate power of the king, who can still choose to ignore what everyone else says.

CULTURE MINISTER GUSHES ABOUT A “GOLDEN PHASE” AND “MR. SMIRKY” SAYS ITS A “QUANTUM LEAP”:

Culture Minister Shaikha Mai bint Mohammed Al-Khalifa, clearly having drunk vast quantities of the Government’s strangely contaminated water supply, gushed that “Bahrain witnesses a ‘golden phase’ of its history in the prosperous era of HM King Hamad”. and went on to describe the crisis over the last 12 months “as a catalyst to achieve greater success”. 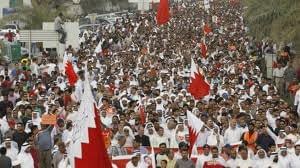 The Opposition parties were less impressed. “The king remains the one to appoint and dismiss the government,” said Abdul Jalil Khalil, a member of the main Opposition group Al-Wefaq.

The opposition wants he continued “a single-chamber parliament that is elected, just as the constitution of 1973 stipulated. These amendments do not abolish the consultative (Shura) council,” he added.

All the members of the Shura Council, or upper house, are appointed or approved by the King, consolidating his power in a chamber that has to sanction the decisions of the lower elected parliament.

The consultative council was introduced in 2002, as part of a new constitution which turned Bahrain from an emirate into a kingdom. It was dismissed by the Opposition as a manoeuvre by the king to control parliament.

Thousands of Opposition supporters took to the streets of Bahrain on Friday to demonstrate their lack of support for the amendments.

“I am Bahraini and dictatorship does not represent me,” said one banner summing up the continued lack of confidence in a system that claims to be “democratic” but remains firmly autocratic and suppressive.  There is a video of Friday’s protest march, Here:
CONSTITUTIONAL REFORMS? MEANINGLESS WHILE BEATINGS, ABUSE AND TEAR-GASSING CONTINUE ON A DAILY BASIS:

Anticipating the largely superficial reforms, Maryam AlKhawaja, Foreign Affairs spokeswoman for the Bahrain Centre for Human Rights, said in an interview with Al Jazeera that as a human rights activist, stopping the nightly tear-gassing of families and their children in their homes is much more important than minor changes to the constitution.

Asked about the “retrial” of her Father, Abdulhadi AlKhawaja, now on the 87th day of his “Freedom or Death” hunger strike, and 19 other pro-democracy activists, Maryam said it was an “appeal” rather than a “retrial”, which made a huge difference, and given the lack of the judicial independence, with a result determined by members of the royal family, the outcome was unlikely to be fair.  You can see full video interview, HERE:

Another Young Boy Riddled With Shotgun Pellets This Week

The irrelevance of the “constitutional amendments” is also illustrated by the police’s continued use of shotguns, injuring protesters seriously on a daily basis.  Most do not got to hospital for fear of arrest.

And meanwhile, as if to demonstrate the “fairness” of Bahrain’s judicial system, the Juvenile Court remanded two 13 year olds to stay in custody for a further 7 days after they were arrested last week accused of taking part in “an illegal assembly and riots”.

The 2 young boys,Yasin Abduljalil Sheber and Abdulkarim Hasan, appeared before judges for the second time yesterday since their arrest the previous Friday.

Defence lawyers said Sheber had been beaten after his arrest in Hamad Town following a protest and Hasan, who was arrested in the village of Shahrakkan, had been “beaten with batons” and constantly referred to in questioning as a “son of Iran”.

Hasan was also accused of “carrying a petrol bomb” and Sheber of “assaulting a policeman and tearing his shirt”, leading to the cartoon below depicting a burly policeman bawling his eyes out and the judge offering him tissues, after he was “roughed up” by a 13 year old!