FATHER AND 4 YEAR OLD SON BLASTED BY POLICE BIRDSHOT WHILE SITTING IN THE STREET:

BAHRAIN’S PATHETIC LEGAL SYSTEM TOO AFRAID OF LOSING FACE TO ACQUIT ALL MEDICS ON ALL CHARGES:

FURTHER RESTRICTIONS ON THE UNIVERSAL RIGHT OF SELF EXPRESSION VIA SOCIAL MEDIA ON THE WAY:

In a week that has seen a 11 year old released after more than 1 month in detention, more children arrested, some in the middle of the night, and now yesterday a small child serously injured with birdshot, Bahrain’s Opposition Tweeters can be forgiven for asking on Twitter whether the Al Khalifa Government has “run out of grown-ups to arrest and shoot?”.

Ali Hassan After His Release

Ali Hassan, the 11 year old (sometimes reported as 12) was released on bail on Monday this week after being initially imprisoned and then held in a juvenile detention centre.

While in detention the six grade student was forced to take his exams while behind bars, not the most conducive environment for clear thinking and exam preparation. All Ali wanted to do was to go home and be with his Mum.

Ali is still charged with “illegal gathering” and “rioting” and accused of trying to block the street against entry by police into his village, and will have to return to court on 20th June.

The youngster says he was just playing in the street with 2 friends when they were chased by plaincloths police. When Ali fell over while trying to escape, he was taken away and unecessarily incarcerated. You can hear his own testimony in this Al Jazeera interview, HERE: 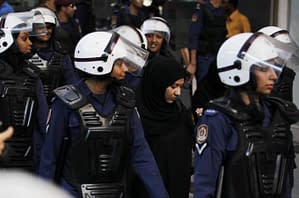 Policewomen Smirk at Despondent Mother after Arresting Her Son

As Ahlam Oun points out an “illegal gathering” is a meeting together of 5 people or more, which would of course make many family meetings “against the law”.

In her blog post Ahlam suggests that this has become the authorities “quick-fix” to neutralise anyone they don’t like, but conversely they fail to prosecute anyone who supports them when the Al Fateh movement for example hold an unlicensed rally.

There have also been numerous reports of villages being raided this week by police in the middle of the night, especially between the hours of 1.30 and 4.30 am.

The raids seem systematic and deliberate, one by one targeting in the last 7 days the villages of Salmabad, Daih, Jidhafs, Al Musala, Aali, Sanabis, Sitra, Buri, Muharraq, Duraz, Bilad Al Qadeem and many more and arresting people while they are still half asleep.

The raids are often noisy, aggressive and violent and almost always without a warrant to arrest.


Ali Ashoor, shown here, is 16 years old and has been detained since January 5th. He is currently the youngest prisoner in Jaw prison.

Yesterday Hassan AlSamea, 12 years old, was dragged away from his mother and arrested despite her attempts to prevent it.

The despondent face of Hassan’s Mother and those of the smirking female police officers having succeeded in their task, say it all.

12 Year Old Dragged Away From His Mother

Worst of all this week is the shooting of a 4 year old child (earlier reported as 5 years old.

EDITOR: Can someone tell me why there are always problems in Bahrain getting ages right?)

Ahmed Naham was sitting in the street with his Father who was selling fish, as photographic evidence confirms.

Mr. Naham says the police coming down the street told them to “go away” but as he prepared to pick up his child, a policeman opened fire. The 4 year old now has 2 pellets in his left eye and more in other parts of his body. The father has pellets in his thigh, stomach and arms. Video on the Internet shows police carrying the boy away, closely followed by his father.

After arriving at the Salmaniya Medical complex, police and security service personnel prevented people and some members of the family from speaking to the father or seeing the little boy.

He is now undergoing treatment.


EDITOR: It seems very evident to me that this is a new tactic – target children and indirectly intimidate their parents in the hope that they will keep their offspring away from protests. Fat chance – far too late for that! Sumood.

BAHRAIN’S PATHETIC LEGAL SYSTEM TOO AFRAID OF LOSING FACE TO ACQUIT ALL MEDICS ON ALL CHARGES:

But of course, the persecution of adults in the Shia community in Bahrain does not stop either. This morning,Thursday, while nine of the medics who have been on trial for over a year in military and civil courts, were acquitted of all charges, nine others were convicted.

Some of the Drs Imprisoned or Acquitted Today

Two other medics did not appear in court to appeal their 15 year sentences, having either gone abroad or underground in Bahrain.

The court threw out some of the most serious charges such as “occupying the Salmaniya hospital” and “possessing weapons”, piles of which, including chains, a sword and an AK 47, were brought into court at a previous hearing.

“This is an unjust ruling,” Twefik Dhaif, the uncle of two of the convicted medics said.

“These are the elite doctors in this country. We have 15 doctors in my family, and most of the people they have treated were Al Khalifas,” referring to Bahrain’s controlling family. You can read Al Jazeera’s report, HERE:


Clearly this has nothing to do with justice. Everyone knows that all the medics did was help treat the injuries of protesters in very difficult circumstances.

Reducing sentences and freeing some is the best the Bahrain Government and judicial system can come up with in the face of continued international criticism and in an a pathetic attempt to save face. And it is not enough.

Donna McKay, the executive director of Physicians for Human Rights, said after the verdict, “It is a travesty of justice that the trials continued and that the medics are now sentenced to jail time”.

Dr. Nada Dhaif, the only one of the doctors on trial allowed to travel, spoke at a demonstration in Dublin on 12rh June, HERE: supported by other speakers such Jamila Hanan (aka Frankie Dolan), HERE:  Respect to you both for your clear statements.

And the injustice continues. Nabeel Rajab, the President of the Bahrain Centre for Human Rights was due in court again this week but was remanded in prison again, without a court visit, until 18th June. He is also due in court on 19th May on another charge, but no-one will be surprised if that hearing is delayed also.

All part of the not-so-sophisticated sadistic mental torture practiced by the Al Khalifa Government.

Ahmed Aoun, an imprisoned 17 year old student, who had a police shotgun pellet embedded in his right eye, was denied an operation at the end of May, but now 2 weeks later the surgery has been carried out. The delay may have cost him his sight.

He was originally arrested while receiving treatment at a private hospital for his injuries which were sustained while supporting a peaceful demonstration.

Now comes news that Sayed Hadi Al Musawi, a former Opposition MP who recently gave testimony at the UN Human Rights Commission in Geneva during Bahrain’s Universal Periodic Review (UPR) on human rights, has been called for questioning today at the Public Prosecutor’s office following a complaint by the Ministry of Interior.

At the time of the UPR hearing local loyalist media in Bahrain referred to the participants as “traitors” and they were threatened with prosectuion by the Minister of Interior himself.

The Bahrain Justice and Development Movement, who also attended the UPR session, said “Regardless of whether this relates to Sayed Hadi’s involvement in the UPR there is no justification for the call for investigation. Sayed Hadi is an opposition activist and human rights defender who has always worked within the framework of the law.

This is is another attempt to try to silence the opposition and does not constitute a serious attempt by the authorities to take the country out of the current crisis.”

FURTHER RESTRICTIONS ON THE UNIVERSAL RIGHT OF SELF EXPRESSION VIA SOCIAL MEDIA ON THE WAY:

In addition to all that the likely direction of further arrests and prosecutions is indicated by a statement reported in the press by the recently appointed Minister of State for Information Affairs, Samira Rajab.

Samira Rajab, a past supporter of dictator Sadam Hussein apparently, said that Bahrain is set to introduce tough new laws to combat the “misuse” of social media.

Claiming that action was necessary to “guarantee the security of the state”, the minister said, “We have a right to punish those who indulge in seditious behaviour and create disunity among the people.

We have to think of how to protect our national security. We have these new threats and we have to see how we can tackle those threats”.

Speaking at a conference organised by the Bahrain Centre for Strategic and International Studies and Energy, she asserted that “social media had been and continues to be abused by the so-called human rights activists”, citing claims “that drowning victims had been killed by torture” and that “sickel cell victims” had been killed by security forces.

(EDITOR: Though independent examination of victims in both those cases has indicated that the victims had been severely tortured before death.)


Compounding the Al Khalifa Government’s inane and immature ability to understand the rights of individuals to self-expression in the modern world, the King, King Hamad bin Isa Al Khalifa held a meeting at the Bahrain Defence Force (BDF) Command Headquarters.

In his speech to the officers present, the King said yesterday, “Our armed forces are the protectors of the nation’s achievements and everybody must know that whoever disrespects the forces or its leaders is in fact abusing us”.

We cannot tolerate,” the King continued, “Any irreverence of our beliefs, social values and armed forces in the name of freedom of expression. All competent executive agencies have to take the necessary measures to address these violations in accordance with the law”.


TRANSLATION: “Criticise the armed forces, police or security forces and we will take that personnally and make up new laws to prosecute you for defamation”. For the oppressed in Bahrain it does not get any easier.

Previous Post UN Monitors Allowed Into Site of 4th Massacre Only After “Attempted Cover-up”? Next Post EGYPT: The “Revolution” that Never Was?