BAHRAIN – News: Human Rights Activist “In High Spirits” Apparently – Can You Believe a Word They Say?

According to a report in today’s Gulf Daily News, the main English language pro-government newspaper in Bahrain, they had been told by “sources” that Abdulhadi AlKhawaja was still at the Bahrain Defence Force hospital and was in “high spirits”. 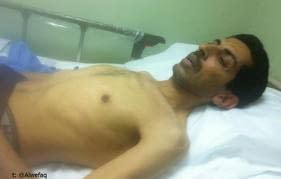 AlKhawaja in "High Spirits" After 79 days on Hunger Strike?

The report also claims that “he has never stopped receiving intravenous fluids, although nurses did say he tried to stop taking water two days ago” and that for the last 2 days he has been drinking the nutritional drink Ensure.

According to Google, “Ensure is a food supplement often recommended by nutritionists or dieticians to ‘ensure’ that patients are getting enough calories and vitamins when swallowing difficulties or arm weakness make eating whole foods difficult or no longer pleasurable”.

It is often used with sufferers of motor neurone disease who are no longer able to feed themselves normally.

The press source also went on to say that AlKhawaja “has lost at least 11kg to 12kg, but he is not skeletal. His muscle mass is still there, but his fat mass has definitely gone. His skin is very tight so it is difficult when searching for a vein for a needle, but for the last two days he has been taking the nutritional drink Ensure.

Reports that he has gone missing are not true – and I saw him coming out of the bathroom where he was in high spirits.”
You can read the full report HERE:

This report that AlKhawaja is “in good health” was compounded yesterday by a video interview by BBC’s Hardtalk programme with Bahrain’s Minister of Justice and Islamic Affairs Khalid Bin Ali Al-Khalifa. He says that AlKhawaja is receiving “optimum health care”.

EDITOR: Whatever that is? If you can bear to watch this grinning, smirking  idiot, the video report is HERE: 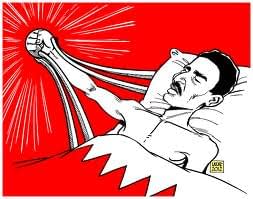 So after 79 days on a hunger strike then, AlKhawaja is “fine” the Bahraini Government would like us to believe.

That he is apparently still alive is a relief but why they refuse to allow anyone to see or talk with him is highly suspicious.

The claim is that the “doctors” have said that visits and phone calls must stop.

Why? Just another collective punishment on his family and followers it seems to me – and once again a demonstration of the Al-Khalifa’s complete lack of humanity.

AlKhawaja’s appeal against his conviction comes to court again on Monday 30th April.  But don’t get your hopes up. On their past track record the Bahrain justice system will make it as difficult and awkward as possible, probably postponing the decision yet again.

Meanwhile the ridiculous monarchy in Bahrain play out their games with the King sending a “cable” to the Prime Minister, thanking him for his “cable” thanking him for the “success” of  (the half full stands at) the F1 Grand Prix weekend.

(EDITOR: Someone should tell them about those new invention, emails and the telephone!).

There is also much made on the official Bahrain News Agency website of visits by the Prime Minister, and a string of other officials, to the bedsides of injured police officers and also to a mother and son injured in a gas cylinder explosion that severely damaged their home and showered them with glass.

Speaking to the police officers, Khalifa bin Salman Al Khalifa, the antique Prime Minister, said, “To say “thank you” is not enough. We need to show love and respect to the security officers and translate that into deeds”.

“The Prime Minister lauded popular stances in support of the security officers which, he said, emanate from the Bahraini inherent humane characteristics”, says the report.

“He stressed rejection of all forms of intimidation and terrorization of citizens, asserting that Bahrain will always remain and oasis of security and stability under the wise leadership of His Majesty the King”.

(EDITOR: If you can face reading the full report without reaching for the sick bag, it is HERE:

Strange that we never noticed members of the Government visiting the families of those whose loved ones have died from police brutality or mysteriously in the Al-Khalifa prisons. I must have just missed the reports that day!