BAHRAIN’S TWISTED LEGAL SYSTEM CONTINUES COURT FARCE WITH A “RETRIAL” OF ALKHAWAJA AND 20 OTHERS:

BAHRAIN GOVERNMENT CLAIM ALKHAWAJA “NOT FORCE-FED” – HOW COULD HE BE ALIVE AFTER FASTING 83 DAYS OTHERWISE?:

Following international pressure, particularly over the case of Abdulhadi AlKhawaja, Bahrain’s Al Khalifa family run Government yesterday announced via the Court of Cassation that all 21 defendants convicted last year in a military court of “plotting against the monarchy”, would be sent for retrial in a civilian court.

Eight of the defendants, including AlKhawaja, had previously been sentenced to life imprisonment and 7 of the defendants were given long sentences in absentia. The 14 who have been held in prison since their arrest in the Spring of 2011 will not be released pending  retrial. 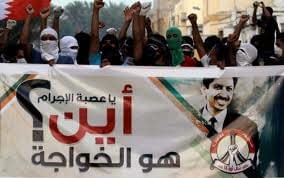 A entirely new trial with prosecution and defence witnesses will take place, meaning effectively that the Bahrain Government has found just another way of keeping them in prison while at the same time pretending to the world that it is “listening” and “reforming its legal system”.

However, the Al Khalifa Government has “pulled the wool” over the eyes of the international community too many times to be taken seriously and therefore any of its “good” actions in regards to the Opposition will be regarded skeptically.

Sayed Hadi al-Mousawi, a spokesman for the Opposition Wefaq Party, said, “This ruling is just a step in the right direction, but the street will not calm down until all the prisoners are freed. This is just a part of it”. 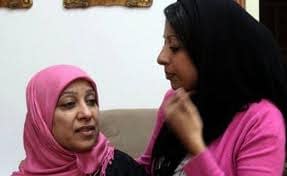 Khadija al-Mousawi, AlKhawaja’s wife, said, “If they are serious they should set them free and then retry them.

My husband is going through the whole thing again, remembering the horrible episode of torture, attempt to rape and sexual abuse.

I think it is ridiculous, what sort of legal process is this? They are playing for time, and should have transferred his case to a civilian court at the first hearing not the third.”

The BBC has a video report, including an interview with Khadija, HERE:


BAHRAIN GOVERNMENT CLAIM ALKHAWAJA “NOT FORCE-FED” – HOW COULD HE BE ALIVE AFTER FASTING 83 DAYS OTHERWISE?:

AlKhawaja himself is now in the 83rd day of his “Freedom or Death” hunger strike. When his family were finally allowed to visit for an hour on Sunday, after being denied access for a week, AlKhawaja told them that he had been tied to the bed, sedated and force-fed through a nasoenteric tube.

Despite denials on their Government news agency website from the Bahraini Defence Force military hospital where he is being held, that this was the case, it is almost certainly the reason he is still alive. Almost all previous hunger strikers have not survived more than 73 days. He has vowed to continue his strike.

The family were also allowed to visit Zainab AlKhawaja, Abdulhadi’s daughter, who has now been held in custody for more than a week for staging a sit-down protest on the highway in support of her father.

Zainab told her family that she had been kicked and beaten on arrest.

That abuse, torture, arbitrary arrests and distortion continue in Bahrain, despite its “commitment” to implementing the recommendations of the BICI report issued last November, was highlighted again on Sunday when Human Rights Watch (HRW) published another report titled “Bahrain: Police Brutality Despite Reform Pledges”.

In a visit from 15th – 19th March 2012, HRW interviewed 14 youngsters, including 7 children, who had been arrested and then taken to informal police facilities and isolated public places and beaten before being released or taken to police stations.

Interviews and formal proceedings at police stations are now supposed to be recorded on video.

One 20 year old described his treatment after being arrested on February 11th and taken to the former youth hostel in Sanabis, a place activists have identified as one used for abuse and torture.

“I had lost my shoes and could feel grass beneath my feet. With my hands cuffed behind my back, they made me kneel and bend over and they started kicking me and beating me with sticks. Someone said: “Finished.”

Another voice said: “Too early, continue.” They then removed all my clothes, apart from the tee shirt that they had turned on my head, and laughed at me. They then put my pants back on and asked me to pray.

As I leaned forward, I and the other prisoner were kicked from behind and we fell forward into a swimming pool, still with hands cuffed. The pool was shallow, so I was able to stand but the water was cold – it was a particularly chilly evening.

When I fell into the pool, my tee shirt hood came down and I could see policemen standing around the pool”.

HRW raised “the issue of police brutality and torture during arrest and at informal facilities with Bahrain’s chief of public security, Major General Tariq al-Hasan, and his two senior international advisers, John Yates and John Timoney, on April 17.

Timoney and Yates said they had visited some of the facilities identified by Human Rights Watch but found no evidence at the time of their visits of detainees being taken there and mistreated.

As yet no senior police or security officer has been held accountable for abuse, torture or deaths in custody in Bahrain and not one single police officer has as yet tbeen convicted of such a crime. You can read the whole HRW report, HERE:

Bahrain’s Foreign Minister, Sheikh Khalid Bin Ahmad Al Khalifa, who describes himself on his Twitter profile as a “Bon Vivant” (EDITOR: But judging by his photographs has been clearly “Bon Vivanting” rather too much lately – see @khalidalkhalifa and below – and perhaps got the word “BAFTA” confused with the English word “BURP”), last weekend incited his 80,000 socila media followers to vote against the Al Jazeera award winning TV documentary “Shouting in the Dark”.

The Al Jazeera film, much of which was shot undercover, documents the Bahrain uprising of 2011 and the aftermath. It has already won numerous awards and is currently one of 4 nominees for the 2012 BAFTA (British Academy for Film and Television Arts) prize for Current Affairs.

Sheikh Khalid told his followers to vote for a Channel 4 film about Sri Lanka, one which probably few of them have watched, and, ironically, whose film makers Bahrain’s Government deported from their country recently (see below).

So far, his “call to action” has not helped much. As of this morning, Tuesday, “Shouting in the Dark” was ahead by around 7,000 votes, polling 52.25% of the vote. The other 2 programmes by Panorama have jointly polled less than 1% of the vote.


The UK’s Channel 4, whose journalists were chased by police and deported from Bahrain for filming “illegally”, have had some of the footage that they lost at the time smuggled back to them. You can see their video report, filmed during the F1 Grand Prix week, HERE:


Ironically, the votes of Sheikh Khalid and his supporters are irrelevant anyway. The BAFTA Awards are decided by an independent jury and will be announced on the 27th May. The Radio Times poll was merely to gauge the views of its readers and it makes no difference to the end result. You can read the full BBC article, HERE:

EDITOR: As a satirical blogger I am so grateful to the Bahrain government for the endless ways it makes a fool of itself. Thank you.