ASSAD REGIME IN FRENZY Of ATTACKS

ASSAD REGIME IN A FRENZY OF INDISCRIMINATE ATTACKS AFTER FALL OF AIRBASE, DELIBERATELY TARGETING CHILDREN AND CIVILIANS:

Since the fall of the Taftanaz airbase in Idlib province last Friday, the Assad regime, in an apparent frenzy of retaliation has bombed and shelled Opposition held positions and districts across Syria, killing in the last few days more than 30 children and at least 11 women, plus many men both combatants and civilians. 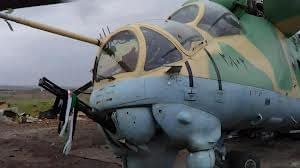 In the aftermath of the capture of Taftanaz, the largest regime helicopter base in northern Syria, video footage has revealed seized stocks of barrel-bombs and a helicopter prepared to deliver them, and a destroyed helicopter, still with the bodies of Assad’s dead troops inside it.

The town of Taftanaz itself has come under heavy rocket and shell attack since the nearby base was taken. However, continuing their campaign of targeting Assad’s air power and the bases it operates from, Opposition forces have continued attacks on the Menegh, Quwayres and Jarah bases in Aleppo province and Deir El-Zour airport.

At Menegh, the Opposition fighters are making progress, breaking through the perimeter of the base and raising the revolutionary flag, HERE:  and shelling Government positions with a powerful 130 mm Howitzer, HERE:

This video footage shows Opposition fighters attacking the military airbase at Deir El-Zour, HERE: while there are also reports that a Government convoy transporting senior military officers, including a brigadier general, was successfully attacked between Deir El-Zour and Palmyra.

The suburbs around Damascus and its rural areas are currently seeing some of the heaviest fighting, bombing and shelling.

To try and slow the Opposition attacks on the Mezzeh military base, the regime has bombed all the houses in the immediate area to deny the fighters cover.

The regime also claimed over the weekend that it had seized the Opposition suburb of Daraya, where heavy fighting has continued for weeks, but as clashes have continued in the last few days, despite most of the area being destroyed, the fighters continue to hold out. The effects of shelling on Daraya can be seen, HERE:

Bombardments have continued against the Damascus suburbs of Hazeh, Douma, Jesrin, Irbin, Moadamiyeh, Shebaa and Beit Saham and particularly on the East Ghouta region near the capital where the Opposition fighters are especially strong and well organised.

This morning, Tuesday, heavy clashes are reported between the 2 sides in the neighborhood of As-Sayeda Zeinab and near the Air Defense headquarters in the Al- Maliha district of Damascus.

There are also reports that the regime launched 3 Scud missiles from the
outskirts of Damascus city (Battalion 578) heading towards northern areas of Syria at 2.30 am this morning, Tuesday.  This follows on from another confirmed missile launch logged by NATO tracking radar at the weekend. 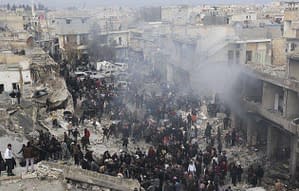 One of the worst attacks in the last few days was on the Opposition held town of Azaz in Aleppo province where MIG fighters targeted an open-air market on Sunday killing 20 and wounding more than 90.

Medicins Sans Frontieres (MSF – Doctors Without Borders), who operate in the area said they were inundated with bodies and casualties.

In the view of their spokesman, the Assad regime had deliberately targeted civilians, many of whom were children out with their parents innocently enjoying the first sunshine after the winter storms.

“The cars and ambulances kept on coming and patients flooded the hospital,” said Adriana Ferracin, an MSF nurse in Syria. “We received many patients with limb amputations, head injuries and bleeding eyes and ears.”

Heavy bombing and shelling has also been reported on Idlib and on Houla, where 10 people have been killed in an artillery attack this morning, and Rastan in Homs province, as well as the suburbs of Homs city itself.  Some districts of Homs have been under constant Government siege for more than 6 months.

Heavy clashes continue to be reported in the south of Syria around Deraa, credited with the start of the revolution. Opposition fighters attacking a Government position can be seen, HERE:  and targeting a building with Assad snipers on top, HERE:

TWIN EXPLOSIONS AT ALEPPO UNIVERSITY WHILE STUDENTS SITTING EXAMS CAUSE 52+ DEATHS AND INJURE 160:


An explosion at Aleppo University has additionally been reported this morning, which the Government are blaming on “terrorists” but which activists say was an aerial attack by Government aircraft.

7,000 students were reported to be taking their exams at the time and unconfirmed reports say deaths are anything from 15 to “70”.

This raw footage shows smoke rising from the University and the moment of the second explosion.

The latest statement from a military official in Aleppo told the AFP news agency that the explosion occurred after rebels tried to shoot down a warplane with a missile, but failed to hit their target.

A Syrian government official in Damascus told The Associated Press that two rockets hit the university’s Information Technology Academy. The official said the two rockets were fired from a rebel-held area in Aleppo.

Latest details from the Opposition side put deaths at 52 and expected to rise, while Government sources are saying 80 dead and 160 injured. Further details as the position becomes clearer.

While clashes are reported as ongoing in the city’s Old City and throughout the suburbs, Aleppo, once Syria’s business and industrial heart has been largely destroyed but some clusters of buildings remain by mutual consent.

Some businessmen persuaded both sides in the conflict to largely leave some of the industrial areas alone and although it has not been immune to shell strikes, some industrial buildings are now home to groups of internally displaced refugees.

Aleppo is also home to some of Syria’s jihadist fighting groups, including the US banned Al-Nusra Front.

This terrifies many Western governments who fear that if they get a foothold and establish an Islamic state which then democratic countries and their assets will come under threat worldwide.

The problem is the jihadist fighters are often the most effective in combat, the best experienced, having fought in other war-zones, the best disciplined and the most dedicated and formidable foes of the Assad Government.

Even secular members of the Free Syrian Army give them grudging respect for their fighting skills and achievements.  You can read more from Reuters, HERE:

A report just in from Jordan says that the legal leader of Jabhat al-Nusra (the Al-Nusra Front), Riyad Hdeib, known as Abi Hamza, has been killed in Tafas near Deraa following Government shelling.

Hdeib, aged 32, was a Jordanian national. Around 300 Jordanians are believed to be be fighting in Syria on the Opposition side.

RUMOURS THAT ASSAD AND FAMILY BASED OFFSHORE ON RUSSIAN SHIP AND HITLER LOSES IT HEARING OF ASSAD’S IMPENDING DEFEAT:

After the killing of so many children in Syria in the last few days Human Rights Watch based in New York has called on more countries to sign to sign up to the letter drafted by Switzerland calling on the Security Council to refer the Syrian situation to the International Criminal Court (ICC) for an investigation.

So far 57 countries, including all of the EU except Sweden and newly independent countries such as Tunisia and Libya, have endorsed the letter but as yet it has not been signed by the US.

In a statement, Switzerland said “the numerous allegations of crimes against humanity and war crimes in Syria need to be investigated and those responsible on all sides of the conflict brought before court. ” Russia has called the request “ill-timed and counter-productive”.

Two interesting rumours about President Assad, both unconfirmed.  One says, in reports originating from Saudi Intelligence, that he and his family are living safely on a Russian warship in the Mediterranean, Assad himself travelling to meetings in Damascus by helicopter.

The second unconfirmed rumour is that Assad has given instructions that if he is assassinated then the military should launch rocket attacks against Israel, though the source of the information is the Arabic version of Russia Today (EDITOR: Not my favourite source of reliable postings!).

If you are in the West, next time you are comfortably filling up your car at the gas/petrol station, contemplate the picture of guys smuggling plastic cans of gasoline from Iraq to Syria on their backs, through the snow with open-toed sandals.

Or these children living in concrete block buildings with no doors, no heating, not enough clothes and the ground covered with snow, in this BBC video HERE: