On Saturday, the Turkish Army once again, without provocation, fired rockets at Dikmatash village in Afrin Canton, targeting a YPJ headquarters.

Though 6 mortar shells landed in the village, no casualties were immediately reported. The shelling is particularly dangerous as the population of Afrin Canton has swollen recently with an influx of refugees fleeing the bombardment of Sheikh Maqsoud, the Kurdish district in Aleppo City.

Fighting was reported on Sunday in the north-west of Raqqah province near Ain Issa between the YPG and the Islamic State (IS) and also in Hasakah province near Shaddadi. Although casualties and deaths are said to have occurred on both sides, the details at the moment remain sketchy.

There is also an unconfirmed report that members of the Kurdish-led Syrian Democratic Force (SDF) “assaulted an elderly man and took 10 of his sheep” after he was accused of supporting IS in the village of Jahfah Al-Dhib near Ras Al-Ain.

Schools for Arabic children have also reopened in Shaddadi for the first time in a year, using a curriculum supplied by the Assad regime’s Ministry of Education. IS had previously used the schools, before it was driven out by the SDF, as HQs for its operations in the area.

However, in Aleppo province, the Islamic State has recaptured 8 small villages west of Al-Rai and over the weekend the village of Tel Battel, which is only 1 kilometre from the Turkish border. Opposition groups had briefly held Al Rai after capturing it from IS but could not sustain the advance, losing it again after a few hours of occupation.

Meanwhile, the SDF is still preparing its assault on Manbij, which according to latest information now only contains 400 x IS fighters, mainly foreigners, in the urban area.

This map, courtesy of @Chuck Pfarrer, shows current positions with SDF holding its advance into IS territory, here: 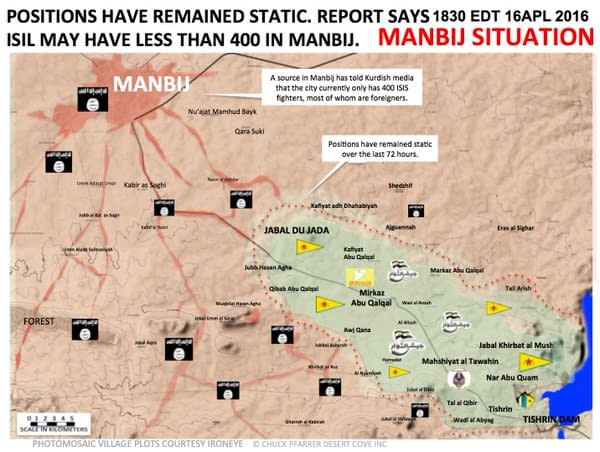 Attacks by the Al Nusra Front and their Islamist and Opposition allies on the Kurdish neighbourhood of Sheikh Maqsoud in Aleppo are increasingly causing problems as injuries and deaths rise and supplies of food and medicines shrink.

Evidence of the effects of chemical weapons attack has also increased as skin eruptions and diseases break out, here:

Human Rights Watch (HRW) has protested all attacks on civilians in Aleppo, including Sheikh Maqsoud, but still they continue from all sides in breach of the agreed “cessation of hostilities”. You can read more, HERE:


The other remaining problem for the Kurds and members of other ethnic groups is unexploded ordinance, IEDs and booby-traps left by a retreating Islamic State.

On Friday, 2 children aged 6 and 7 were seriously injured in an explosion in the village of Al-Kantry near Ras Al-Ain (Sere Kaniye) after playing with a “metal object”. They were quickly transported by local Kurdish police to the hospital in Qamishli.

Frédéric Maio, Program Development Manager for Handicap International’s Mine Action group, said, “What we saw in Kobane was beyond our worst nightmares: a significant part of the city is vastly destroyed and unexploded weapons contamination of all kinds have reached a density and diversity that has hardly ever been witnessed before”.

An estimated 50% of civilian deaths in Kobane have been caused by explosives hidden in the ground and they are a formidable barrier to the clearance of destroyed buildings in Kobane city and redevelopment.

Lack of job opportunities and the spiraling price of scarce food supplies means that living conditions, particularly for those with large families, is continuing to be difficult as this video illustrates, here:

However, the story of Kobane and the bravery of the Kurds and their female fighters, continues to spread. On Sunday the Kurds opened a Rojava office in the Swedish capital of Stockholm, another excuse to dance in the streets and celebrate.

Swedish schoolchildren, inspired by the Kurds story, have incredibly collected $65,000 for a new school to be built in Kobane and handed over a cheque to a visiting YPJ commander. 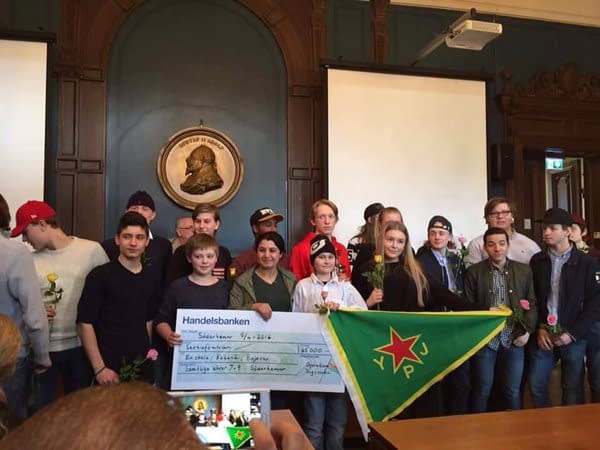 US Central Command (Centcom) reports 9 airstrikes in Syria on Saturday and 17 in Iraq.

Over in Iraq, the Islamic Front (IS) are reported to have started renewed shelling on the Kurdish Peshmerga on the Makhmour front using chemical weapons.

One Peshmerga fighter was reported killed and 4 others were wounded and suffered breathing problems from what was thought to be chlorine gas released from the shells.

More recent reports suggest that a Coalition airstrike on Saturday has killed Barzan al-Husam, who was appointed by IS as governor of the Al-Hamadaniya district in Niveneh province and was thought to have close ties with the IS leader Abu Bakr Al-Baghdadi.

Other recent reports suggest that an IS attack across the river at Al Qayyarah in Iraq was thwarted after Coalition aircraft destroyed 30 x IS boats. Map courtesy of @ChuckPfarrer: