AS FSA MAKE RAPID GAINS AROUND DERAA IN SOUTHERN SYRIA “FLOOD” OF REFUGEES TO JORDAN TURNS INTO A “TORRENT”:

As Opposition forces make sudden advances in the southern province of  Deraa and fighting with Government forces escalates, refugees flood into Jordan. 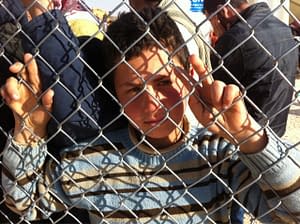 According to the Jordan Times late on Tuesday night, authorities had recorded 6,000 people crossing in a 12 hour period, just part of the 20,000 taken in in just over a week.

The Jordanian Government has appealed for international help in coping with the estimated 300,000 Syrian refugees sheltering in its country, 60-70,000 alone in the Za’atari refugee camp north of the capital Amman.

The BBC has a video report, HERE:

Free Syrian Army (FSA) fighters have overrun several Army checkpoints within Deraa city itself and captured the nearby towns of Bosra and Ghabagheb. 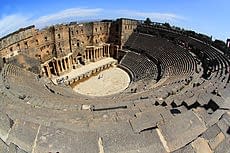 Bosra in an ancient city with a citadel and a UNESCO World Heritage site Roman amphitheatre, one of the finest of its kind in the world.

The FSA have also attacked the  25th border police station in the town of Tal Shihab near the Jordanian border and continue to thwart regime attempts to take the Basr Harir suburb of Deraa.

Jet and missile attacks on FSA positions in Deraa have been reported this morning, further adding to the desperation of civilians to leave.

Similarly, the Syrian Air Force is continuing to strike the Damascus suburbs of Daraya, Douma, Moadamiyat al-Sham and Aqraba, where 3 Government tanks, in addition to a number of armoured vehicles, were destroyed by Opposition fighters yesterday. 8 jet strikes on Daraya have been recorded this morning, Thursday, alone.

There was also violent shelling yesterday on the Palestinian refugee camp of Husainiya, with many deaths.

Scud missiles, believed to have been fired from the Government’s Talkalakh base near Homs, came down on the Al-Bab suburb of Abu Taltal and in Kaljebrin, both in Aleppo province in the north, killing at least 23 people including a couple and their 3 children, the Hazrouni family from Abu Taltal.

Overall, at least 146 deaths were reported across Syria yesterday, Wednesday.

VIDEO ANALYSIS OF ATTACK ON ALEPPO UNIVERSITY SUGGESTS THAT ASSAD GOVERNMENT IS ALMOST CERTAINLY LYING ABOUT ITS COMPLICITY:

In Aleppo city itself, video analysis of the second bomb explosion on January 15th at Aleppo University, which killed at least 87, has revealed that it was almost certainly a rocket/missile strike, undermining the Government claims that the deaths were caused by car bombs.

The Government’s alternative claim was that they were “terrorist” missiles aimed at aircraft that had missed their targets, but the size of the explosions, the likely trajectory and distance travelled are not consistent with this theory either.

Slowed down the video reveals a missile coming in from the top right (near top of  lamppost), HERE:

There are also unconfirmed reports today, Thursday, that Opposition fighters have breached the perimeter and entered Menegh military airport, a key Government installation near Aleppo. More information as it arrives.

Other reports confirm that Opposition fighters have taken the Al-Ghouna oil field in Hasaka province, HERE:  and that another group of fighters have blown up the oil pipeline to the refinery on the Mediterranean coast near Banias.

In Homs, Government shelling and rocket attacks continue on Opposition held areas such as Jobar, HERE:  and in nearby Al Qusair heavy clashes between the 2 sides are reported, HERE:

In Raqqa city in the north-east, Opposition fighters staged an attack on the central prison, killing many Government troops, while the Syrian National Coalition is reported to have intervened to try and stop fighting at Ras Al-Ayn between Jihadists and Kurdish militia, both of whom are against the Assad regime but fighting each other for control of the area.

RUSSIANS PLAY-DOWN SIGNIFICANCE OF 1ST EVACUATIONS WHILE ASSAD GOVERNMENT OPTIMISTICALLY CALLS FOR A “MILLION-MAN PRAYERS” THIS FRIDAY TO SAVE THE REGIME:

In Moscow, the Russian Foreign Minister, Sergei Lavrov did his best to play down the evacuation of Russian citizens from Syria via Lebanon on Tuesday, denying that is part of a wider plan.

However, he did admit that the families of Russian diplomats had been evacuated earlier and at least 1,000 people of Russian extraction or married to Russian citizens had expressed a desire to their Damascus embassy to leave Syria.

One returning Russian woman, Natasha Yunis, who is married to a Syrian and ran a beauty salon in Damascus, said, “The Free Syrian Army is getting closer. We’ve been left without money, without light, without water. A bomb exploded near our house … The children hid”.

In the event, the 2 flights that Russia organised from Beirut contained only 77 people, but there are as many as 30,000 of Russian origin living in Syria at the last count. The BBC has a short video report, HERE:

Sergie Lavrov also lashed out at the Syrian Opposition and their “obsession” with the ousting of President Assad before any talks could take place, saying, “As long as this irreconcilable position remains in place, nothing good can happen. Armed actions will continue and people will die.”

Conversely, the Saudi Foreign Minister, Prince Saud al-Faisal, said it was “inconceivable” to negotiate with anyone who “carpet-bombed” his “own country, his own history and his own people”.

Meanwhile, at the World Economic Forum in Davos, Switzerland, Turkey’s Foreign Minister, Ahmet Davutoglu, said,  “There should be a clear signal to the Syrian regime that what they have been doing, bombarding cities by airplanes, is a war crime,” adding that he expected the U.N. Security Council to step in “to stop this bloodshed.”

The UN’s humanitarian chief Valerie Ann Amos, sitting alongside him, said, “The humanitarian situation in Syria is already catastrophic and it’s clearly getting worse. What we are seeing now are the consequences of the failure of the international community to unite to resolve the crisis.”

Back in Syria more detail emerged about Assad’s new Syrian Defence Force, designed to defend neighbourhoods from Opposition attack.  The first of the units passed out and paraded after training at a football stadium in Homs.

The first Women’s unit has 450 recruits aged between 18 and 50 and they are on duty manning checkpoints 4 hours a day and the rest of their time carrying on with their normal jobs.

Lastly, in a feat of over-optimistic illusion, the Syrian Government’s Religious Endowments Minster, Mohammed Abdel Settar, called for a “million-man prayers” in mosques this Friday to “appeal for the re-establishment of security in the country” (EDITOR: On the Government’s terms of course).

“Syria”, he burbled on, “Will prevail against the conspiracy launched by hostile states, carried out by their proxies and slaves, and led by Wahhabi infidels from abroad” (referring to the strict Wahhabi fundamentalism based in Saudi Arabia).

An interesting article also emerged in Al-Arabiya, claiming that Assad had told the UN envoy Lakhdar Brahimi on his last visit that he was in fact to prepared to sacrifice and destroy Damascus if necessary in order to win the war.  You can read more, HERE:

While Assad sits in his comfortable presidential palace and rants and schemes, 100’s of thousands of his countrymen now suffer. Al Jazeera has a video report of the appalling conditions in the Atmeh refugee camp, the only one in Syria, as the refugees live in fear and struggle to survive, HERE:

Syrian Refugees Forced to Survive in the Snow – Reuters