NASSER, “PRINCE OF TORTURE” AND PERSECUTOR OF ATHLETES DUE TO ATTEND LONDON OLYMPICS AS VIP:

This week the Olympic torch was lit once again using the sun’s rays in a ceremony at the site of the very first games at Olympia in Greece to begin its journey to the Olympic stadium in London. The flaming torch will be carried to Athens by foot before being flown to London. 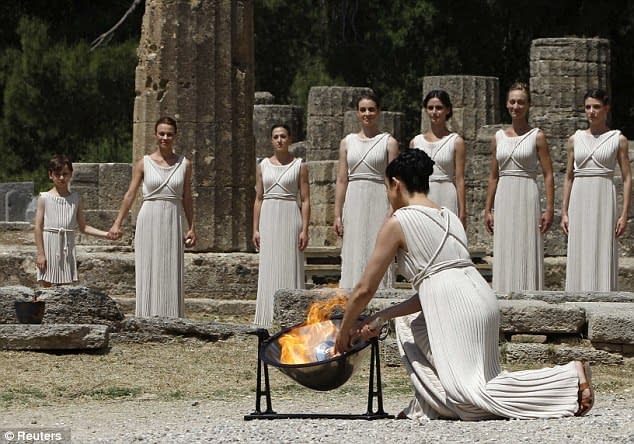 And on July 27th the torch will finally reach its destination at Stratford in East London where it will be used to ignite the Olympic flame to open the 2012 Olympic Games in the UK.

(EDITOR: I once carried a portable typwriter from Olympia to Athens in a 500 mile journey by foot across Greece. Not quite the same as a flaming torch I know – but a damn sight heavier and another [true] story for another day!)

Present at that ceromony will be the officials of the International Olympic Committee and all the presidents of the national olympic committees from countries around the world.

All of these officials will be given free access to every Olympic event, accomodation at a discounted rate at a luxury hotel in London and a chauffeur driven BMW to take them to and from the Olympic venue and around London. 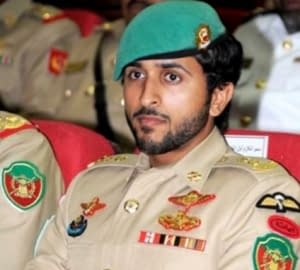 One official to enjoy all of these priviliges will be Bahrain’s “sports ambassador”, Sheikh Nasser bin Hamad al-Khalifa, aged 24, son of King Hamad of Bahrain and President of the Bahrain Olympic Committee.

Sheikh Nasser is very familiar with the UK having trained at Sandhurst, Britain’s world renowned military academy, and is now, despite any real military experience, the commander of Bahrain’s Royal Guard.

Last year during the disturbances in Bahrain, Sheikh Nasser rang up a live broadcast on state TV and commenting on demonstrators said, “Anyone who called for the fall of the regime, may a wall fall on his head. Whether he is an athlete, socialite or politician — whatever he is — he will be held accountable . . . Bahrain is an island and there is nowhere to escape”.

You can see the video of the TV programme, with English sub-titles, HERE:


Just to show that this was no wild, hot -headed statement by an out-of-control young and inexperienced member of Bahrain’s “royal” family, the Government subsequently put Sheikh Nasser in charge of a committee that identified and targeted 150 Shi’ite sportsmen and officials, including international footballers and other well known sports stars.

The committee even went after disabled athletes, who were accused of opposing the regime.

Two of the victims of this sectarian persecution (EDITOR: Because that is what it is) were A’ala and Mohammed Hubail, brothers who were both in the Bahrain national football team, one a goalkeeper and the other a leading scorer. Both the players were arrested last year, subjected to torture and removed from the team.

Mohammed, who was capped 52 times for Bahrain, was sentenced to 2 years in prison by a military court last year but was subsequently released after several months in jail.

At the time the United Nations Human Rights Commisssion said that the trials of the Hubail brothers ‘appear to bear the marks of political persecution’ and FIFA, the world football authority, sent officials to investigate.

The Hubail brothers were only 2 of 30 footballers arrested plus 26 basketball players, 27 Handball players, 22 Volleyball players, 2 bodybuilders, 1 special needs athlete, 12 sports administrators and referrees and 5 sports journalists all taken into custody and many imprisoned and abused for lengthy periods.

Picture: Many think Alaa Hubail was persecuted for helping the injured in Sitra:

At the very least, most have had their lives completely disrupted and their sports careers wrecked.


And their crime? Taking part in demonstrations calling for democracy – a human right in any civilised country.

When Mohammed Hubail received his 2 year sentence, Sheikh Nasser wrote on Twitter, “If it was up to me, I’d give them all life.”

To escape further embarassment, Sheikh Nasser has recently removed all his past Tweets from his Twitter Timeline.

Many others detained last year also report being tortured by Sheikh Nasser and other members of the “royal family”.

Specifically, Abdulla Isa Al-Mahroos, reported to the Bahrain Centre for Human Rights (BCHR) that Sheikh Nasser Bin hamad Alkhalifa, beat him while he was in detention and then forced him to open his mouth and spat in it.

Mohammed Habib Al-Muqdad, a Islamic cleric who is also a Swedish citizen, described how when blindfolded and being tortured, suddenly everyone went silent and the words “your majesty” were heard.

A voice said, “Do you know who I am?”. When Al-Muqdad said “No”, his blindfold was removed and the man infront of him said “I’m Prince Nasser Bin Hamad Al-Khalifa. When you protested outside our castle in Safriya, only a wall separated us”.

Mohammed was asked what chants he had said at the protest that day. When Mohammed said “Down Down Hamad” Nasser slapped him and he fell to the ground. Sheikh Nasser then, it is reported, with the help of the other torturers, beat Mohammed severely.

Most of the torture sessions were said to have taken place in the underground cells of the Ministry of Interior (MOI) at Al Qala  in Manama.

Four other members of the “royal family”, including Sheikh Nasser’s brother Khalid and a female member, Shaikha Noura Al Khalifa, a MOI officer, are also accused of personal involvement in the torturing of detainees. For further information go to the BCHR site, HERE:

Andy Slaughter MP, chairman of the UK parliamentary group for democracy in Bahrain, has said, “Welcoming prominent members of the Khalifah regime accused of repression is a real blot on the Olympics”.

The UK’s Foreign Secretary, William Hague, says the government won’t hesitate to use its powers to extend London 2012 travel bans to individuals and officials with connections to “undesirable regimes” and Sheikh Nasser “would be closely assessed before being granted entry to Britain to attend the Games this summer”.

EDITOR: However, don’t hold your breath, the UK’s history of supporting bloody suppression in Bahrain is long and complicated and I will cover this further in another blog post.

Some say that sport, and the Olympics in particular, should not be mixed up with politics. I say that is an excuse to allow brutal and repressive regimes to get away with murder, often literally, and to show a face to the world that says they are “acceptable” when they are clearly not.

The world has changed. Governments that make compromises for self-serving reasons with oppressive, undemocratic governments, as the UK and the US do in Bahrain, will be increasingly challenged by an articulate, technology savvy, electorate worldwide.

Countries like China and Russia (and Bahrain) will be more likely to move towards reform in my view if they are told they will be excluded from international football, sports, Olympics, other competitions and international realtionships in general. Only being able to play sports with North Korea, another pariah state, and their friends must be boring to say the least.

Insolation and sanctions eventually bring a result, of which Burma is the latest country to decide to open its borders and government to reform as a result of co-ordinated international action.

Not only is Sheikh Nasser likely to be let quietly into the country to view the Olympics but his Father, King Hamad, is due to take part in Queen Elizabeth ll’s 60th Jubilee lunch at Windsor Castle on May 18th.

Unlike Bahrain, Queen Elizabeth has no political power whatsoever and acts as a useful constitutional monarch and non-politicised head of state.

While large demonstrations took place in Bahrain in support of Nabeel Rajab, the President of the Bahrain Centre for Human Rights, on Friday and Saturday this week, the Al Khalifa regime took futher steps to consolidate his imprisonment.

Yesterday he was remained in custody for a further 7 days and to the list of “charges” has been added an accusation that he “delivered a speech during a public gathering urging those present to stage a march, confront authorities and use violence against security forces.

He also allegedly incited them to escalate the situation to ensure that confrontations result in deaths”.

(EDITOR: Which is news to everyone else, including those organisations that have awarded him and the BCHR numerous prizes for their human rights work.)

According to the report, “an illegal rally was organised in Manama following his speech, on the same day, which resulted in disrupting public order, blocking roads and attacks against security personnel”.


Nabeel is due in court again next Wednesday to answer charges “of insulting an official body” – “the MOI” apparently. Clearly, another series of sham trials and twisted, dishonest judicial proceedings is about to begin.

EDITOR: However how the Al Khalifa Governent hope to solve problems by doing this I do not know. Only at least another 397,000 members of the Shia community to arrest and prosecute on “prison island” left!