(If you arrived here in error, read Part 1 and Part 2 first.) 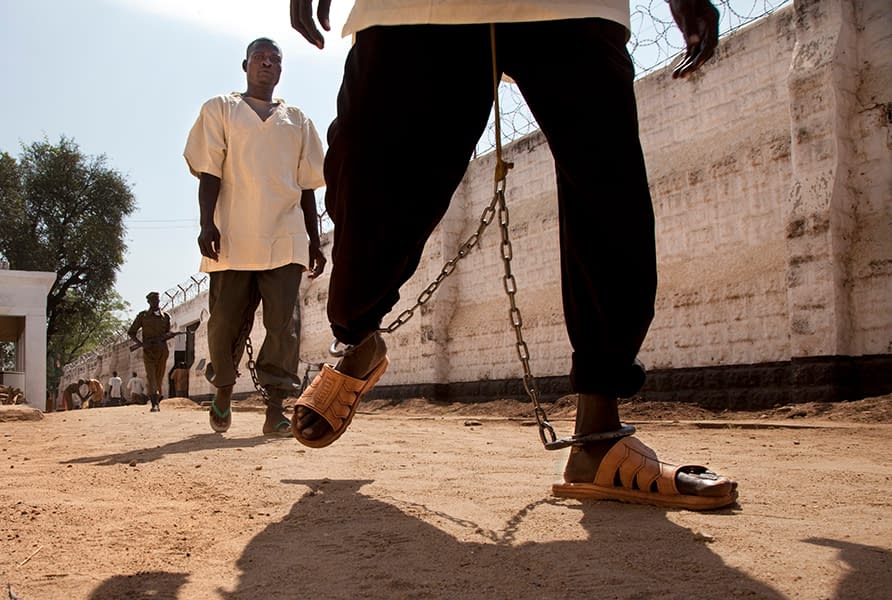 
When we got to the airport there was just one aircraft, a brand new American C-5 Galaxy with Sudanese markings.  The Lockheed C-5 is a military transport plane with a large cargo bay and basic seating for troops along the side walls facing inwards towards the centre.

The airport was packed with businessmen almost fighting to get a place on the aircraft as this had been the first plane to arrive for weeks.

If they didn’t get a seat they would either have to make the two week overland journey that we had made to get back to the capital Khartoum or wait even longer for the next random plane to arrive. (President Nimeiry had presumably already left some days ago with his entourage in his private jet).

When our prison guards got the all clear we made our way to the rear of the aircraft but before we got there we were overtaken by a stampeding scrum of sweating businessmen determined to get one of the very few available seats.

Tempers flared, people were shoved and barged out the way and finally the airport authorities intervened and made everyone, except ourselves, return to the terminal.

We were allowed to stand with our guards under the shade of one of the aircraft’s vast wings and out of the sweltering heat while order was restored to the embarcation process.  At this point, one of those bizarre moments that you never forget occured – two Americans (God bless ’em) appeared from the plane carrying ice cold cans of Coca Cola (how do they do that?)!

Turned out that they had been sent with the aircraft to train the Sudanese pilots to fly the plane.  They were as surprised to see us as we were to see them!  But the very cold Cola was a welcome relief in the dry, dusty heat of a South Sudan summer.

We were boarded first and strapped in the seats and the businessmen were then allowed on one by one until all the remaining seats had been filled.

In between the seats on either sidewall the cargo hold was filled by an enormous van – a camera van flown in specially for the occasion to film President Nimeiry opening the radio station he had come to visit (and obviously long before handheld digital film cameras and satellite uploads).


After a bit of a bumpy ride down the dusty airstrip the aircraft roared into the air and its powerful engines carried us within a few hours all the way back to Khartoum.

Not luxury but when you have acquired a hernia, as I had on the journey down, its a lot more comfortable than riding all day on the back of sugar lorry.

At Khartoum airport security was more relaxed and our armed guards handed us over to a seemingly unarmed plain clothes security policeman in a jeep. From the airport we were driven to Sudan’s Secret Police headquarters and I suppose I am one of the few white guys in the world to have made the visit.

Just to reinforce the seriousness of the occasion – and to discourage any thoughts of escaping I guess – as we drove through the main gates a smartly uniformed black soldier leapt out of the sentry box with a rifle and long fixed bayonet and let out an almighty banshee yell of terrifying proportions!

I am glad to say that things began to improve from this point on.  After a short wait we were brought before a senior official, beautifully dressed in a turban and pure white robes, who was clearly well educated and spoke perfect English.

He quickly realised, I think, that we were absolutely no threat to Sudanese security and were just simple travellers and not the Israeli assassins that his over-zealous colleague in Juba had probably portrayed us as.

From then on we were placed under “hotel arrest” and escorted to the hotel where we had stayed on our previous visit to the city.

Although the authorities had retained our passports and our money, the kindly hotel manager, himself a refugee from war torn Ethopia and about seven feet tall in my recollection, remembered us from before and took the risk of accommodating and feeding us for free until we could pay him.

We had been told by the security services to stay in the hotel and not to go outside at all, so my girlfriend and I dutifully sat around for a week talking to all the other visitors that past through. After seven days I had had enough of waiting and so I took the risk and went to the British and German embassies to ask for help.

The British were useless, I am sorry to say –  “it’s your own fault” – but the Germans took action and within another two days another security officer turned up at the hotel, gave us back our money and passports and said we could go.

Our original target had been to cross Africa overland from Alexandria to Nairobi, but still feeling a bit rough from the hernia, there was no way I could now face another two week journey by train and lorry back to Juba and then across the border into Kenya.

So we took the easy route and flew out of Khartoum – in a comfortable, regular airline seat this time – to Nairobi airport.

After a few days in Nairobi – extraordinary contrasts in wealth and poverty, skyscrapers adjacent to slums – we headed north to look for work as our funds were running low.  I also had myself checked out at a local hospital and a doctor after prodding me about a bit confirmed my hernia: not an emergency and I would be okay for some time as long as I did not strain it.

Work wise this rather restricted me and after to speaking to a local Bishop, resplendent in purple but otherwise of a not very spiritual demeanor, it was clear that finding employment was going to be extremely difficult.  Always reluctant to throw in the towel, I had some difficult decisions to make but eventually decided to take the easier option to fly back to Europe and look for new opportunities there.

As our money was running out we had to take the very cheapest flight from Africa to Amsterdam which was an overnight flight with the Russian airline Areoflot – Chicken Kiev served at three in the morning as it turned out!

And the added bonus was an overnight stay at an Intourist Hotel in Moscow, all accomodation and food paid, with a connecting flight onto Amsterdam in another plane the following day.

Again, arriving in Russia we were told to surrender our passports and were ordered to remain in the hotel, but me being me I could not visit Moscow without a trip to Red Square, so we sneaked out of the hotel under the noses of the KGB………….