UN Monitors Allowed Into Site of 4th Massacre Only After “Attempted Cover-up”?

AFTER 2 DAYS UN OBSERVERS REACH SITE OF 4th MASSACRE TO STILL FIND BODY PARTS AND THE STENCH OF BURNT FLESH:

HOURS OF FIGHTING AS FSA STRIKES BACK IN DEFENCE OF ATTACKED PROTESTERS IN DAMASCUS:

UN observers finally made it yesterday into the deserted farming village of Mazraat Al-Qubeir, 2 days after a reported massacre of more than 80 people, at least half of them women and children.

UN Monitors in the Remains of Al-Qubeir

Despite the claims by the Syrian Government that it was “nothing to do with them” there was clear evidence of armored-vehicle tracks in the vicinity and some homes were damaged by rockets from armored vehicles, grenades and weapons ranging in calibre.

Only the Syrian army has armored vehicles and heavy weapons.

In some houses there was still evidence of human flesh, blood and body parts and the air was filled with the stench of burnt bodies. The UN are still trying to establish exactly what happened.

Neighbours of the community blame miltia gangs from nearby Alawite villages. The BBC’s Paul Danahar accompanied the UN team and was witness to what they found in this video report, HERE:

HOURS OF FIGHTING AS FSA STRIKES BACK IN DEFENCE OF ATTACKED PROTESTERS IN DAMASCUS:

Early this morning, Saturday, Deraa in the south of the country came under heavy shelling and 17 people were reported killed, 10 of them women. 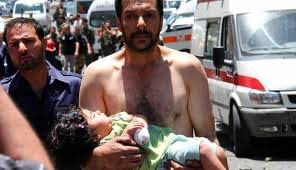 Many Killed and Wounded From Shelling in Daraa

Yesterday also saw some of the heaviest fighting in Damascus since the conflict began with Syrian Army troops opening fire on anti-government protesters and members of the Free Syrian Army (FSA) retaliating in their defence.

FSA fighters openly appeared at a rally in Kfar Souseh and attacked an Army checkpoint in the same area.

Clashes additionally occurred in the Damascus suburbs of Qaboun and Barzeh with tank fire until 1.30 am  on Saturday morning. The FSA attacked a power plant in Qaboun with rocket-propelled grenades, setting fire to a generator and causing blackouts. The attack left buses charred and a smashed car.

Maath al-Shami, an opposition activist said, “Yesterday was a turning point in the conflict. There were clashes in Damascus that lasted hours. The battle is in Damascus now.”  Associated Press has a fuller report, HERE: